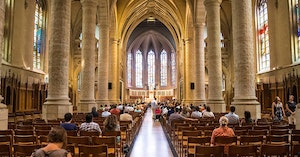 14 Moments That Made People Realize Religion Isn’t That Great

Most people who were once religious and no longer are will tell you it happened gradually. Hypocrisies and unanswerable questions start to pile up and pile up until there’s nothing left even worth believing in.

But it’s also common for there to have been one or two truly eye-opening instances that either started people on their journey away from religion, or solidified that they were done. Redditors are sharing those moments, and it’s not difficult to see why people are becoming disillusioned.

Seeing a whole congregation of people perform an “exorcism” on a 5 year old boy.

Being kicked out of Christian school prior to the third grade because my Mom bought the wrong edition of the bible.

The non-answers to all my questions as a kid. “You just have to have faith” is a dumb way to respond to an inquisitive mind.

Learning that the Catholic Church ran womens homes where they kidnapped babies, sold the ones that didn’t die and used their mothers as forced labour.

For me it was when everyone found out tons of priests were fucking little kids and the church protected them instead of punishing them and reporting it to the police.

Seeing how people use religion as an excuse to be shitty people around the world. So many people just bend their interpretation of a religion to fit what ever they want.

Going to a megachurch. They received over 1 mil in donations every weekend and spent it on elaborate props and videos rather than helping the community in any meaningful way.

Really toxic people at my church growing up. Seeing people only go to church to make connections and gossip rather than actually worship and do good for others.

When I was sexually assaulted by another boy and I spoke to my pastor because I was afraid to tell my family. He asked me what I did to make the other kid have impure thoughts and tried to make it out to be my fault.

When I was 6 years old, the pastor gave a letter to my aunt to give to my mom saying that we were not donating enough money to the church. So we stopped going, and I have never been to church since.

So many things but the final straw for me was my church asking a homeless man to leave and not come back. He would sit and listen to the sermons never bothered anyone and always sat in the very back. I confronted my youth group leader and she defended the preacher.

When the pastor started ranting about the evils of women, saying that Satan walks among us in the body of every female and men must take measures against them. It was later enforced in my mind when I met his very timid granddaughter in high school. She fully believed she was cursed from birth and showed serious signs of abuse.

This 13 year old kid got exposed for being gay and was bullied into suicide by his family for it. I remember during summers they would send him to a special camp to cure his gayness. I was really good friends with his little sister and she would always say how embarrassing it was to have a gay brother and would hope he would become straight. He ended up hanging himself at 13 or 14.

I was 15. My father had been diagnosed with ALS. I had gone to a youth group thing with a Christian friend of mine and they had a circle of teenagers going around talking about things going on in their lives and relating it to God. When it was my turn, I shared that my father was dying and I didn’t understand why him, I was angry and I said something along the lines of I doubted there was a God if this was happening…I got chewed out for even questioning God and the rest of the kids refused to talk to me the rest of the night including my friend. You would think I had killed someone it was THAT strong of a reaction.