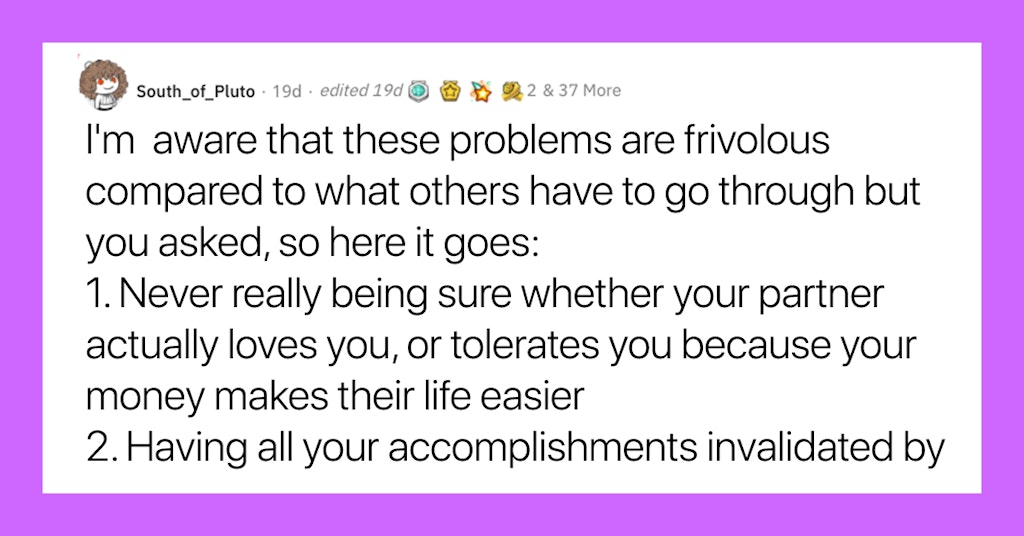 Curiosity about how rich people live is nothing new. It’s driven tabloids, MTV’s Cribs, movies and TV shows about extreme wealth, and endless think pieces about whether making hundreds of thousands of dollars per year really makes you rich or not.

But one thing that we don’t talk about quite as frequently — outside of those think pieces that tend to focus on how much money wine and private school costs — is what sort of problems rich people face. Whether people struggling to make ends meet have any desire to sympathize with them or not, it’s still an interesting topic that provides some perspective about the human experience that most of us will never know firsthand.

Wealthy Redditors are opening up after receiving the prompt “What are rich people problems like?” in the r/AskReddit forum. And yeah, some of these things are deeply unrelatable, but they do just go to show that while money solves a whole hell of a lot, too much of it can come with its own string of problems as well.

All your poor relatives move close to you and start asking you for things and money.

“Lifestyle creep” — the more money they earn, the more they spend, and it never feels like they’re truly “rich.”

Figuring out how to give your kids everything they want without turning them into spoiled brats who are messed up for life.

Having the awkwardness of going out with family/friends or partying and paying. like I’m not trying to flex, just doing the right thing. when you go out with me, I pay, it’s nothing and I just want to hang out with you.

Best friend’s family growing up won $4.5mil on the lottery, while previously already owning 6 coffee franchises and doing decently…Unfortunately both of his sons became heroin addicts which was enabled by easy access to money.

The main thing I noticed is this: you compare yourself to your peers, and when you’re wealthy, your peers are wealthy, and you often feel like you’re falling behind your friends, even when you’re at 5-10x median income.

Is anyone doing things because they actually care for you or because of your money? It is a real problem for rich guys I know looking for marriage. Sex is one thing, actually have someone love you is another.

Feeling like you can’t talk about certain things with people who don’t make as much. I’m not “rich” but I make more than some friends. There have been times when I’ll tell them about something and I get a sarcastic “must be nice” reception.

I used to work in fine art shipping and rich people constantly call and ask if we could remind them which house we’d shipped their expensive artwork to… they would have trouble remembering.

It feels like a lot of your issues get downplayed because you’re wealthy. I’ve been struggling with mental health for the past few years and a lot of the times peoples attitude is that when you’re wealthy you don’t have problems. It can feel very dismissive.

My rich friend has no kids so he’s trying to figure out how to spend all his money before he dies so it doesn’t go to some cousins he doesn’t like. If I just mention something I like, he’ll buy it for me immediately. It’s ridiculous.

Having all your accomplishments invalidated by the fact that you have money. I’m the first to recognize that I haven’t had to face most of the barriers that others had, that I’m benefiting from incredible privilege. I’m eternally grateful for that. That said, I still think I have at least a bit of merit for the things I’ve done.

My boss is a pretty significantly wealthy guy, and his family in general is very wealthy and looking in from the outside when he’s in his venue drinking with people, there’s definitely a problem of people taking advantage of being your friend for freebies and privilege over your staff. Cannot imagine going through life with that many fake people trying to get something.

A good friend of mine has a terribly rich father. And he told me that his dad never had ‘friends’ like my parents do who come by from time to time and bring a small present like something from their shop or from the market and drink coffee together or a beer in the evening. That changed my perspective a bit of rich people when I was younger. They miss out on small acts of kindness, because people think it wouldn’t affect them.

I know a few people from extremely rich families. I see a terrible outcomes with third generation wealth. When dad is super successful, the kid doesn’t have to do much but at least sees someone working. When that kid, who doesn’t do shit, then has kids, his kids are completely unmoored from reality. It’s a lonely dark existence when you are completely incompatible with society.

Okay I’m actually going to answer the question seriously. For context, I was born in a wealthy family (not obscenely rich, but well off). I’m perfectly aware that these problems are frivolous compared to what others have to go through, and I don’t feel sorry for myself at all, but you asked, so here it goes:

1. Never really being sure whether your partner actually loves you, or tolerates you because your money makes their life easier at times.

2. Having all your accomplishments invalidated by the fact that you have money. I’m the first to recognize that I haven’t had to face most of the barriers that others had, that I’m benefiting from incredible privilege. I’m eternally grateful for that. That said, I still think I have at least a bit of merit for the things I’ve done. I’ve known other people born into wealth who haven’t done shit with their lives because they take everything for granted and think success is owed to them.

3. Alternatively, having all your everyday life problems brushed away. For example, I understand than suffering from mental health issues is a lot easier when you can afford therapy, but it’s still fkn hard at times and money doesn’t magically make those go away over night.

4. As a woman, it can make it hard to navigate relationships because a lot of men still identify with the bread winner role.

5. The general guilt that comes with recognizing your privilege. I see a lot of my friends struggle with crippling debt and financial issues. I know I’m not personally responsible for this and there isn’t much I can do beyond helping out here and there. But it’s very guilt inducing to see how much this system is rigged against them while simultaneously making it easier for me.

That’s it for my rich person problems.

This is from a conversation I had with a guy I met on vacation, he had grown up fabulously rich. But he never really saw his parents that much, specially when he was a kid as they were both high achieving workoholics.

Instead he had a maid.

That had been there for as long as he could remember, put him to bed at night, breakfast in the morning etc… So in his mind, he had two moms.

The one that he met for dinner a few days a week, that demanded he brushed his hair and put on presentable clothes. And his real mom, the one that was always there, actually taking care of him.

When he was 5 years old the maid quit. She had gotten a better job somewhere else, and was looking forward to spending more time with her ACTUAL kids.

And everybody was happy for her. Everybody smiled, and told him to be happy she was moving on to something better. As she hugged him goodbye and happily walked out forever. He lost his real mom, and he wasn’t even allowed to feel bad about it.

I met this guy when he was 27, and he was still struggling with it.

I have a very wealthy friend, and seeing this first hand blew my mind. I thought the moochers would be subtle or ask for small things or maybe just hang around in hopes of getting some scraps, jackal style. Uh, no.

Everyone from siblings down to the ex boyfriend of a 2nd cousin will just straight up demand that he buy them a vacation home or pay for their $80,000 around the world cruise (both real examples), and when he inevitably says no, they go scorched Earth policy on social media and talk about how selfish he is and how he disowns his own family for money, and then a month later they are back begging on the door step. It’s exhausting, and I’m just watching from the outside.