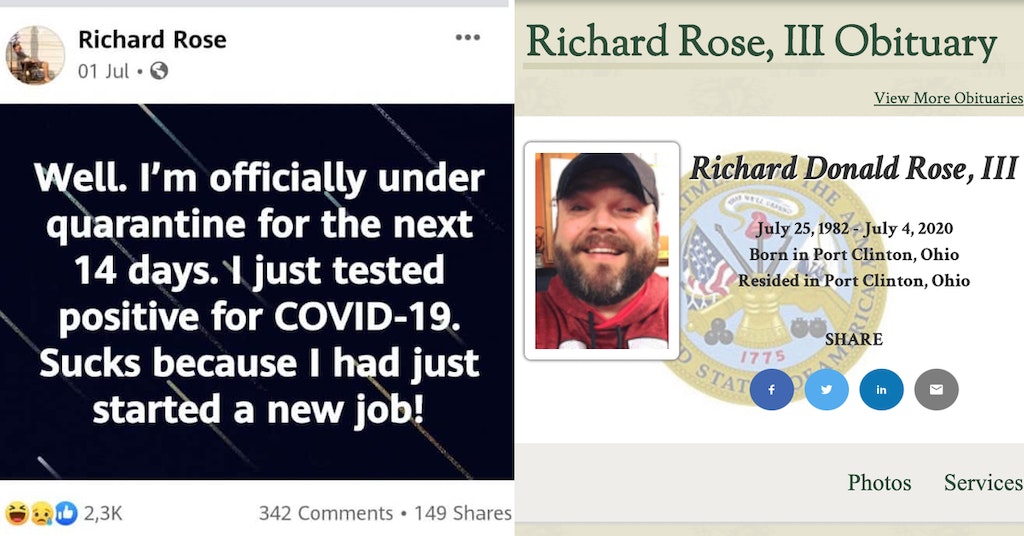 An Ohio man is serving as a cautionary tale after posting on Facebook that he refused to wear a mask — and subsequently dying of COVID-19.

Back in April, Richard Rose of Port Clinton, Ohio, made his thoughts on masks known:

“Let[’s] make this clear,” he wrote. “I’m not buying a f—king mask. I’ve made it this far by not buying into that damn hype.”

Two months later, he posted a photo of a semi-crowded pool party he attended, captioned “It’s not that packed lol.”

Within another two weeks, Rose shared that he was awaiting the results of a COVID-19 test, which ultimately came back positive. He shared in a comment that he believed the pool party was where he contracted the novel coronavirus, though his Facebook suggested he was also spending time at bars and other similarly crowded locations.

Either way, by July 4, Rose was dead.

Screencaps of his Facebook post tell a horrifying, escalating story, and have been shared across social media thousands and thousands of times.

While some people have callously touted this as an example of someone getting what they “deserved” for refusing to listen to science and health experts, many more see Rose as one of the many casualties of COVID-19 who could have been spared had United States leadership and media not turned the pandemic into a partisan issue.

And Rose’s death is serving as more proof that the virus doesn’t discriminate.

He was only several weeks shy of his 38th birthday at the time of his death, and reportedly had no pre-existing conditions. Though Rose said he had started feeling symptoms slightly before going in to get a COVID-19 test, it was only three days between the time he posted that he was waiting for results and his death at home due to complications from the disease.

Wearing a mask may protect others more than it protects you, but now everyone has to sit back and wonder who Rose may have infected during the short time between contracting coronavirus and losing his life to it. And if whoever infected him had worn a mask — or if he had taken the whole thing more seriously — Rose himself may still be here.