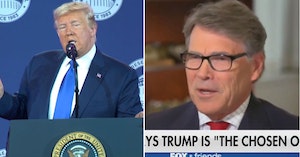 Rick Perry Calls Trump ‘The Chosen One,’ Says He Was ‘Sent By God’ On Fox News

U.S. Secretary of Energy Rick Perry has joined ranks with Donald Trump’s super weird spiritual adviser and a few others in calling the current president the “Chosen One” and saying that he was “sent by God” to lead the nation. However, he didn’t just say this to a national audience. He claims he told Trump himself that he was the Chosen one during a personal Bible lesson in which he compares him to multiple Biblical kings.

Fox & Friends preview an interview with Rick Perry, where he says that Trump is "the chosen one" and "sent by God to do great things"

Pete Hegseth: "God has used imperfect people forever," but what Trump "has withstood is unlike what really any other mortal could understand" pic.twitter.com/ITDAErMJiN

“God’s used imperfect people all through history. King David wasn’t perfect, Saul wasn’t perfect, Solomon wasn’t perfect,” said Perry during a Fox News interview. “And I actually gave the president a little one-pager on those Old Testament kings about a month ago.”

“And I shared with him, I said, ‘Mr. President, I know there are people that say, you know, “you said you were the Chosen One,'” and I said, ‘you were,'” Perry continued.

Thanks for inflating Trump’s ego, Perry, he really needed that.

The clip then switches back to Fox and Friends, where they claim that Rick Perry also believes that former President Barack Obama was sent by God to be president during those eight years before Trump, no matter how hard Perry attacked Obama during that time.

Pete Hegseth went on to claim that he’s talked to people “across the country” who support Trump and that they feel “precisely the same way Rick Perry does” about Trump being “imperfect” but still sent by God. Sure, nobody’s perfect, but did God really need that big of a challenge?

“But what he has withstood is unlike what really any other mortal could understand,” Hegseth concluded, referring to public and media criticism of Trump. They lynched effigies of the last president for being Black and trying to pass healthcare reform but sure.

"A man too arrogant, too self-absorbed, to seek God's forgiveness is precisely the type of leader John Adams prayed would never occupy the White House" – Rick Perry https://t.co/ecNUH44VFX

Is white American evangelical Christianity in such a state of decadence that there's not at least a few in that community who see how obscene this is, how genuinely blasphemous? https://t.co/B1uexUvrCf

Wow. #RickPerry said trump is “the chosen one” & was sent from god. A few years ago that very same man called trump a “cancer” and a “false prophet.” Corruption sure changes things for ppl. The only god @SecretaryPerry worships is money. #FakeChristian https://t.co/SbHmJzj6HT

Rick Perry 2015: “Let no one be mistaken – Donald Trump's candidacy is a cancer on conservatism, and it must be clearly diagnosed, excised and discarded.”

Aside from pointing this out, people are mostly focused on their concerns about the cult-like language so often used by Christian Trump fans.

Trump: Rick Perry made me do crimes.

Rick Perry: Trump was sent by God to save America.

In a new interview Rick Perry says that Donald Trump is "the chosen one" and was "sent by God to do great things.” Trumpism is a full-blown fascist cult.

Gee Rick, how does the kool aid taste? https://t.co/B7EdREH0Nc

In other news, Satanism sees a huge rise in popularity. #RickPerry https://t.co/zGKCqzcvdJ

Others simply don’t buy it.

Also, God, wouldn't send someone who would ask for 5 innocent boys to die, and walk in and watch teen girls change during a pageant, also it's blasphemy to call anyone the chosen one except for God..#RickPerry #ChosenOne https://t.co/GHcwp2ItzR

Christians need to stop passing the buck to God, and own the compromises and sick bedfellows they've been willing to make for SCOTUS seats, anti-abortion legislation, and a rapidly assembling white Evangelical theocracy. https://t.co/1EzSlmhH4e@SecretaryPerry #RickPerry

Wasn’t Rick Perry retiring or something?