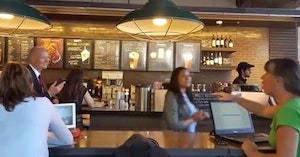 Woman Lets Her Feelings About Rick Scott Be Known When He Walks Into A Starbucks: ‘Shame On You!’

Sometimes things that might be labeled as a “public freakout,” and end up on the corresponding Reddit forum, are warranted. For example, a woman in a video on a popular Reddit post who took the opportunity to tell former Florida governor and current state senator Rick Scott how she feels about him and the things he’s done to people like her as a man with political power.

That’s what he gets for walking into a Starbucks like he’s some regular guy who hasn’t denied millions of Floridians the healthcare they need or sent them into crushing debt just to get the care that was necessary to not die.

The video, originally posted to the “The Masked Liberal” TikTok account, shows a woman working on a laptop at the Starbucks shop in the middle of tearing into the senator as he dismisses her with his smarmy smile before walking off with his entourage.

“You cut Medicaid so I couldn’t get Obamacare!” the woman says. “You’re an a–hole. You don’t care about working peoples.”

She then dismisses one of Scott’s aides as she tries to interrupt, noting that “I’m not talking to you.”

“You don’t care about working people,” she continues. “You should be ashamed to show your face around here.”

Scott tries to counter with the dubious claim that he created “a million jobs,” but this woman is ready to poll the room to challenge it, that room including the underpaid Starbucks employees kept down by the anti-union actions and legislation that the senator supports.

“A million jobs? Wait, who here has a great job, or is looking forward to finishing school, you really feel like you have a job coming up?”

The woman then pivots back to the fact that Scott, along with many other Republican governors, refused free federal money provided under the Affordable Care Act that would have driven down health insurance premiums while strengthening benefits. This was done out of pure spite for former president Barack Obama and the Republican’s insistence that the ACA constitutes “socialism.”

The only thing missing from the video is the standing ovation this woman should have received, but at least the person filming offers her a “sweet.”

Though perhaps the Florida residents in that Starbucks location didn’t all enjoy the display, a lot of Reddit users sure did, because they do not like Rick Scott.