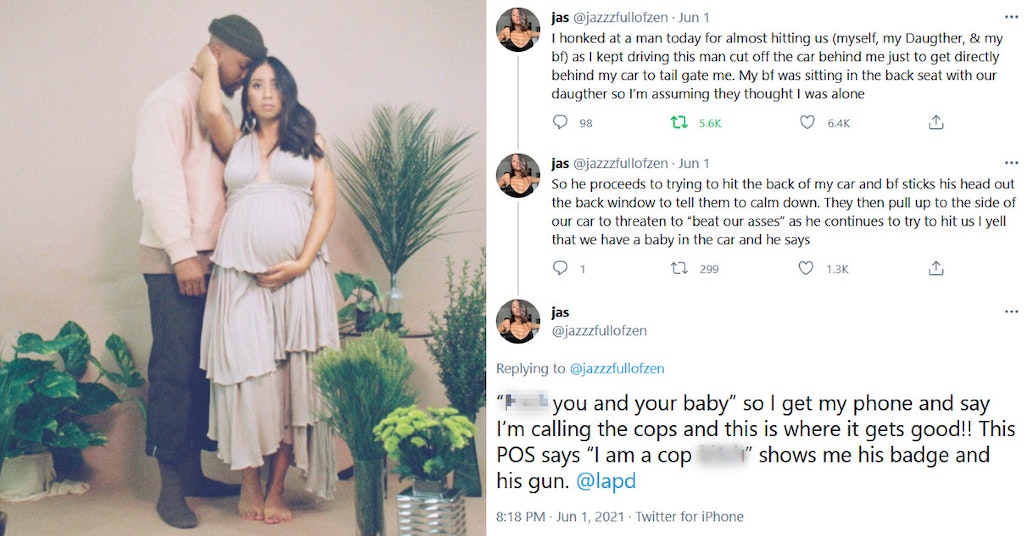 A Black woman is asking people to spread her story of a terrifying road rage incident she endured while her one-year-old daughter was in the car after the perpetrator revealed that he’s a police officer. In a viral Twitter thread, the woman, who goes by “jas,” recounted how she honked at a car that almost hit her only to have the driver cut off the person behind her and proceed to tailgate her, which was only the start of his dangerous behavior.

“I honked at a man today for almost hitting us (myself, my Daugther [sic], & my bf) as I kept driving this man cut off the car behind me just to get directly behind my car to tail gate me,” jas wrote. “My bf was sitting in the back seat with our daughter so I’m assuming they thought I was alone.”

“So he proceeds to trying to hit the back of my car and bf sticks his head out the back window to tell them to calm down,” she continues. “They then pull up to the side of our car to threaten to ‘beat our a–es’ as he continues to try to hit us I yell that we have a baby in the car and he says ‘F— you and your baby’ so I get my phone and say I’m calling the cops and this is where it gets good!!”

After issuing explicit threats of violence and basically cussing at a baby, the man then flashed his LAPD badge and a gun at her when she tried to call the police for help.

Though she was unable to get video of the officer while she was driving, noting that her attention was focused on protecting her infant child, she was able to provide a description of his appearance and “partial plates.” She is now demanding that the cop be fired for not only threatening her, her boyfriend, and her baby, but for using his status as an LAPD officer to further intimidate her and keep her from getting any help.

According to jas, the dispatch operator told her that she couldn’t be helped at all after she fled the scene, terrified for her safety and that of her child, because she wasn’t in the spot where the threats against their lives occurred.

“I told the dispatcher multiple times where I was parked and that I had driven 5 mins from where it happened and she kept saying that they could not help me if I wasn’t in the exact spot where it happened. HA as if I was about to go back and hope he was still there ready to hit us or shoot us.”

Her story is yet another illustrating a deep and systemic problem with the policing system in the U.S., where police officers have near impunity from prosecution and therefore often feel very confident in exhibiting violent behavior and breaking the law whether on duty or off. Because of this and the fact that cops are widely known to protect their own no matter what, jas doesn’t even feel like she can file a police report.

“No I did not file a report but there is a 911 phone call on file that I made as this man was speeding off from threatening me and my family,” she said. “As soon as I said that I was dealing with an off duty cop the energy switched up real quick. So tell me again why I should file a report?”

Supportive commenters are now spamming the LAPD Twitter account with tags, but unfortunately this particular department has a poor reputation on matters of justice even considering the extremely low bar for police in the U.S. However, at least one LAPD officer has been arrested in the past for similarly threatening other motorists and brandishing a gun in another road rage incident in 2019.