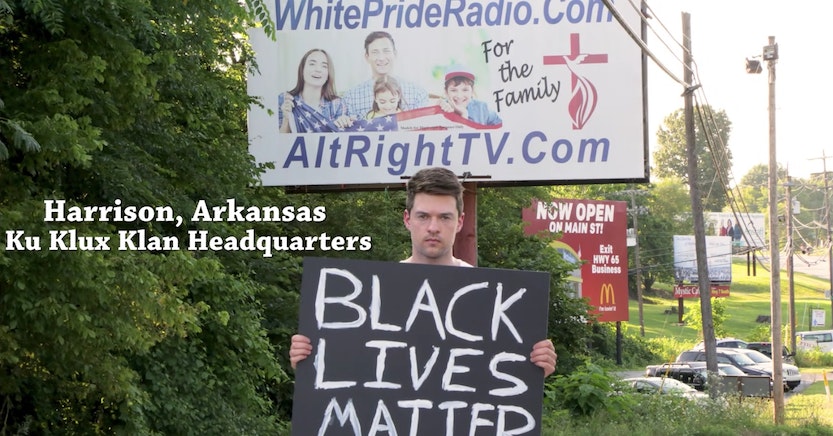 Overt racism isn’t something that most white people observe on a day-to-day basis. Sure, we see those viral videos of some lunatic jerk screaming racist nonsense, but the horrified reactions of everyone else reassure us that the major fight against racism, surely, now revolves mostly around addressing things like unconscious bias, stereotypes, and structural inequalities. The genuinely hateful, raging racist is a rarity, and they’ll die out.

Of course, that’s not actually true.

YouTuber Rob Bliss decided to take a Black Lives Matter sign to Harrison, Arkansas, headquarters of the Knights of the Ku Klux Klan, to remind us all how much of a problem the type of racism we see as mostly “historical” still is in this country.

Dubbing Harrison “the most racist town in the United States,” Bliss, who is white, opens on an image of him holding his BLM sign in front of a billboard advertising WhitePrideRadio.com alongside a cross, a flag, and the slogan “For the Family.”

Bliss spent the rest of the day quietly holding his sign near the town’s Walmart, first out by the street, and later, by the door. He doesn’t appear to say anything or antagonize passersby in any way, and yet a number of white people take note of his sign and have plenty to say to him.

“Have a little pride in your race, brother,” one guy says as he drives by. “White pride, worldwide!”

Another old white man drives by once, giving Bliss the finger, and then drives by a second time to roll down his window and warn the YouTuber that he better be gone in ten minutes when he drives by again.

The montage of cursing and harassment from people driving by that follows makes it obvious that the overall mentality of the Harrison locals is that white supremacy is far more important than Black lives.

A few people try to warn Bliss that he’s making himself a target.

“I wouldn’t stay after dark, man,” one young man says.

“Honestly dude, you have balls of steel, because you could get hospitalized by some guys that wanna beat your ass,” another local identified as Nic says in voice over.

Harrison Mayor Jerry Jackson and Harrison Regional Chamber of Commerce President Bob Largent posted a joint statement, denying that the video is an accurate representation of the town.

“The video does not represent Boone County nor the City of Harrison,” the statement said. “While we cannot excuse the reprehensible behavior and words of individuals recorded in the video, we know for certain that they do not reflect the views of the majority of the good people of our communities. It is obvious there is still work to be done in our area and across the nation. We must constantly strive to do better, and we pledge our continued efforts in that regard.”

While the vast majority of interactions Bliss had in Harrison were clearly overwhelmingly negative, regardless of the claims of city officials, one young girl did approach him silently and hand him a note:

“Ignore the haters your being peaceful. What your doing is good just a friendly reminder. Don’t give up hope.”