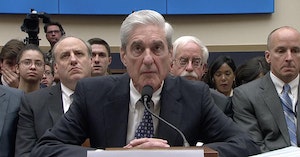 The Mueller hearing today wasn’t even close to over when the memes started appearing, because that’s how we cope with the absurdity of the world now. While Republicans attempt to convince themselves that Robert Mueller’s testimony to the House Judiciary and Intelligence committees has been a “disaster” for Democrats, everyone else is watching an irritated, no-nonsense, and hard-of-hearing man field absurd questions and rants in what is simultaneously a very serious and hilarious manner.

RAISE YOU HAND IF YOU CAN'T WAIT TO SEE BARR'S FINDINGS… ????https://t.co/DtOcQWCLPL

Some of the best humorous moments to come out of the hearing have been Mueller’s deadpan one-liners in response to Republicans ranting and yelling for political points, such as when Rep. Louis Gohmert went on for five minutes and Mueller just said: “I take your question.”

The statement “I take your question” is such a boss move. #Mueller pic.twitter.com/fjSFGIOMpH

Because in five minutes, Gohmert didn’t actually pose a single real question to the former special counsel. Now people are wondering if these four words are going to be the new passive-aggressive response to any demand.

Is “I take your question” the new “bless your heart”? #MuellerTime

This alone has become its own meme, resulting in a treasure trove of hilarious tweets:

"I take your question." pic.twitter.com/eRdvNQMiZr

EDITOR: Where is your story? It was due hours ago!

ME: I take your question

"I take your question" sounded a lot like … pic.twitter.com/cbalqYJm4h

"I take your question" is the new "Bye Felicia."

So "I take your question" is the new "Fuck you".

"I take your question" is a great burn that I don't quite understand but will now adopt whenever anyone yells at me on Twitter. #MuellerHearing

While Republicans freak out about Mueller asking them to repeat questions, others have noticed that said questions have a lot of confusing double negatives.

Republicans yelling double negative questions during #MuellerHearings and Mueller is like pic.twitter.com/Og9sLbinn8

every question: “is it not not true that the president did not not not not obstruct justice?” https://t.co/WAC5QNCvbQ

Mueller says he did not say he did not have a double negative coach to get him ready for the hearings.

Aside from those specifics, people are finding any humor they can out of what has become the definition of a political circus.

I hope Mueller ends his testimony by saying “That’ll do pig. That’ll do.” pic.twitter.com/TaMKQWGGhg

Don’t you hate it when you’re not done with the book and the movie comes out? #MuellerHearing #MuellerTime pic.twitter.com/oy7a6pXoXG

Someday we’ll all look back on this and laugh. If we’re still alive.