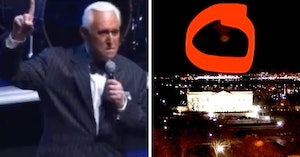 Republicans have accused President Joe Biden’s White House of all sorts of wild things, but Roger Stone is currently trying to outdo most of his ilk by claiming that there is a Satanic portal hovering over the building itself. And yes, he means this literally.

The Trump ally spoke at a rally in South Carolina last week and took the opportunity to spread one of his wildest conspiracy theories yet.

“Yes, ladies and gentlemen, there is a Satanic portal above the White House,” he said with all of the conviction of someone tripping on acid for the first time. “You can see it, day and night. It exists, it is real, and it must be closed and it will be closed by prayer.

He went on to insist that it’s visible on a livestream of some sort and is pointing directly at the White House.

“It popped up after Joe Biden became president, and it will be closed before he leaves,” he concluded.

This isn’t the first time Stone has pushed this religious revelation.

In April, he appeared on a rightwing program making similar claims, and sharing photos of what many have referred to as a lens flare.

“It’s very, very clear. It doesn’t move, day or night. It’s harder to see during the day, but you see it at night,” he said at the time. “And I’m absolutely convinced about the inherent evil of what’s going on in the White House, what’s going on in the country, and I think it’s imperative that people know about this, that people of good faith and Christians know about this, and we begin a national, essentially a prayer assault to close the portal.”

Someone using religion and fear to gain political support is far from a new concept, but the fact that people keep falling for this insanity is the real disappointment.

However, if we were going to follow Stone’s train of thought with this one, the purpose of a portal is to serve as a doorway for things to go back and forth. So until we start seeing demons floating out into the sky or Biden staffers getting sucked up into the nothingness, it seems pretty safe to assume the folks calling lens flare are, at the very least, significantly closer to the truth of the matter here.