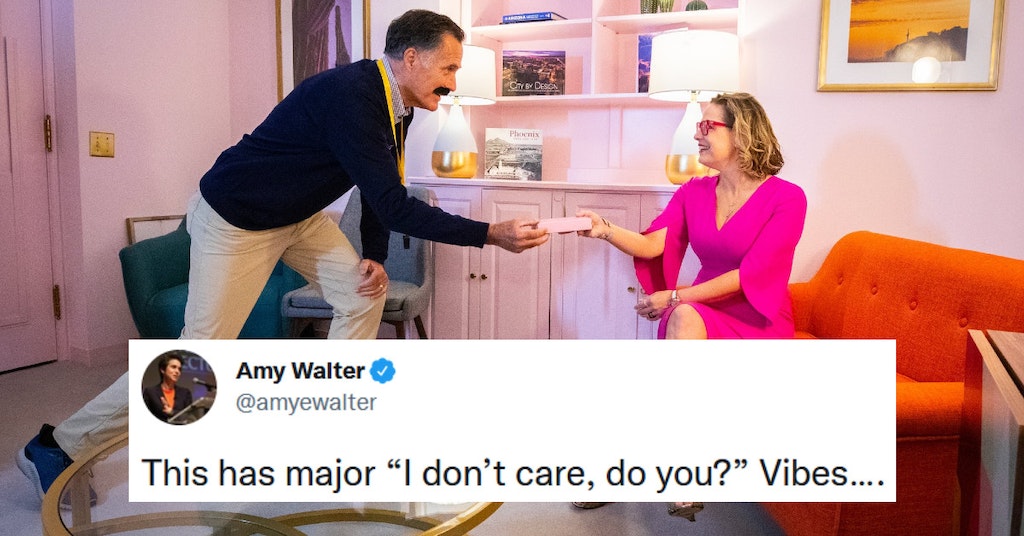 Senator Mitt Romney has been having a bit of Halloween fun dressing up as Ted Lasso, the main character from the hit show of the same name, but has seemingly utterly ruined it by posting a weird video of himself handing a gift box to Senator Kyrsten Sinema, presumed to contain Lasso’s famous biscuits. This is not going over well while Sinema is currently in a battle alongside Senator Joe Manchin to obstruct and water down President Biden’s two major spending bills, resulting in widespread liberal and progressive fury toward the two.

Ongoing frustrations with Sinema in particular, who first earned left-wing ire for doing a little curtsy while voting down a desperately needed minimum wage increase and who reportedly refused to even say what she wanted in the bills she’s been obstructing, resulted in the video being an instant flop.

The brief video shows Romney in his Lasso outfit and mustache handing a white box to Sinema, dresses as the character Rebecca, who happily takes and opens the gift. He followed up with a photo of the gifting calling her “one tough cookie” after calling her “the boss” in the original tweet.

Such a display is not helping with growing accusations against Sinema of taking bribes in exchange for getting every progressive policy tossed out of the Build Back Better plan, including tuition-free community college, paid family and medical leave, free child care, vision and dental healthcare coverage, etc. At best, people are angry that senators are putting on little skits in their fancy offices while the masses continue to struggle in a pandemic, with many hoping that the impending bills will help them somehow, in any way, even as Sinema and Manchin systematically strip that help away.

Others feel this to be a full-on slap in the face, as though the two are bragging about and rubbing faces in the fact that Sinema seems to be doing the Republicans’ job for them, and they’re probably happy to give her things for doing so even outside of a Halloween stunt calling her “the boss.” Romney has gained a reputation for at least putting on the appearance of desiring bipartisanship, but he clearly reached across the aisle to the worst Democrat possible right now.