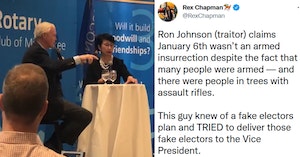 Republican Senator Ron Johnson doubled down on an absurd claim that you can’t accurately call what happened at the U.S. Capitol on January 6, 2021 an “armed insurrection” because he doesn’t know what “armed” means and refuses to learn. “Armed” can refer to the state of carrying anything considered to be a weapon, which is why a mugging with a knife is still considered an armed robbery, but Johnson insists that it must require guns for no reason.

When asked at a recent Rotary Club meeting in Milwaukee if he would characterize Black Lives Matter protesters in the same way he talks about the Capitol rioters, he doubled down on previous statements claiming none of the insurrectionists were armed.

“Well first of all, there weren’t thousands of armed insurrectionists,” he said. “I asked the question of the FBI agent [during] a hearing on this and said how many firearms were confiscated either in the Capitol or on Capitol grounds. I don’t know the answer. For all I know is it would be a thousand. No. Zero. Zero.”

To be clear, there also weren’t thousands of armed BLM protesters during the summer of the George Floyd uprising, unless Johnson wants to reverse his position and expand “arms” to include things like water bottles and umbrellas.

Also, though firearms may not have been on the Capitol grounds, it was found last year that Oath Keepers had stashed a number of guns including at least one rifle at a nearby hotel. Text messages revealed that these dangerous anti-government militia members were gathering the weapons in preparation for the assault on the Capitol.

“Where can we drop off weapons to the QRF team?” wrote Oath Keeper Jessica Watkins in one message on January 4. “I’d like to have the weapons secured prior to the Op tomorrow.”

But to Johnson, the flag poles used to beat D.C. police officers weren’t weapons, and also the insurrectionists can teach us some things. Oh, also, some of them were armed, but they were polite about it, or something.

“Now some of the protesters did teach us all how you could use flag poles, that kind of stuff as weapons,” he added. “But to call what happened on Jan. 6 an ‘armed insurrection’ I just think is not accurate. You saw the pictures inside the Capitol I saw that day. The armed insurrectionists stayed within the rope lines in the Rotunda.”

Johnson has been insisting on dying on this weird hill for some time now. In June 2021, he made a similar claim while trying to paint the overall nightmare that occurred that day and resulted in a number of deaths “non-violent.”

“This didn’t seem like an armed insurrection to me,” he told Mark Levin on Fox News. “When you hear the word ‘armed,’ don’t you think of firearms? Here’s the questions I would have liked to ask: How many firearms were confiscated? How many shots were fired?”

Our best guess for why Johnson is stuck on this premise is that he’s eager to remain in the running for worst Republican in spite of how crowded the field has become.