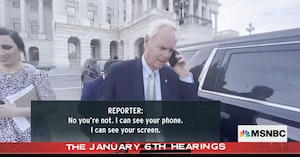 Senator Ron Johnson was called out by reporters for pretending to be on his phone to try and avoid their questions about his role in the plot to get former Vice President Mike Pence to illegally try to overturn the 2020 election results in Donald Trump’s favor. Footage was captured of this failed attempt to duck the reporters showing a blank screen on Johnson’s phone as he holds it up to his ear and talks to nobody, then eventually puts it away without saying goodbye.

However, he still holds the idle phone up to his ear for around 10 seconds after one of the journalists points out that he’s definitely not on the phone.

Johnson was leaving the Capitol building following Tuesday’s hearing by the House January 6 committee — its fourth in a series of hearings designed to lay out the committee’s findings for the public. During this one, the senator’s chief of staff, Sean Riley, was accused of attempting to hand off a list of fake electors to Pence that would declare Donald Trump the winner, ignoring the fact that Biden got the majority of the votes in their districts.

Text messages show Riley offering the list to a Pence aide, Chris Hodgson, who told him not to give that list to the vice president. Later that day, January 6, 2021, Pence would certify the 2020 electoral college vote in favor of Biden after a mob of Trump fans stormed the Capitol to look for him, chanting for his hanging.

Johnson, unsurprisingly, denied any wrongdoing and claimed that he had no knowledge of what was going on among his staff, including his chief of staff, and that the attempted crime was unsuccessful, so it doesn’t matter, right?

“This was a staff-to-staff exchange, and I was basically unaware of it,” he said. “The chief of staff contacted the vice president’s staff, said ‘do you want this?’ They said no and we didn’t deliver it and that’s the end of the story.”

Johnson further claimed that “somebody” had delivered the list of fake electors to his staff’s office and they were just passing it along. Great to know that the senator hired a staff full of incompetents who don’t even look into the thing they’ve been told to pass along to the vice president on the day of election certification, and that Johnson has no idea what said staff ever gets up to. Sounds like fantastic governing.

He also praised Riley for not passing along the list when he was told not to do it, although that sounds like the most basic act of following instructions, especially if the chief of staff didn’t even know what he was holding.

Unfortunately, the U.S. came to a moment where we all had to rely on Mike Pence to keep our democracy together, for now, and it was his whim that prevented an action that could have resulted in a massive constitutional crisis and likely mass rioting. The January 6 committee has repeatedly stressed how close the nation came to seeing its system buckle under the pressure of Trump’s plot to illegally maintain his power.

Many of Trump’s avid supporters, including Johnson, have been implicated in this plot by the evidence presented by the committee in the past four hearings, with more yet to come. Few non-Republicans appear to have any patience for Johnson’s attempt to dodge relevant questions on his role in almost destroying U.S. democracy.