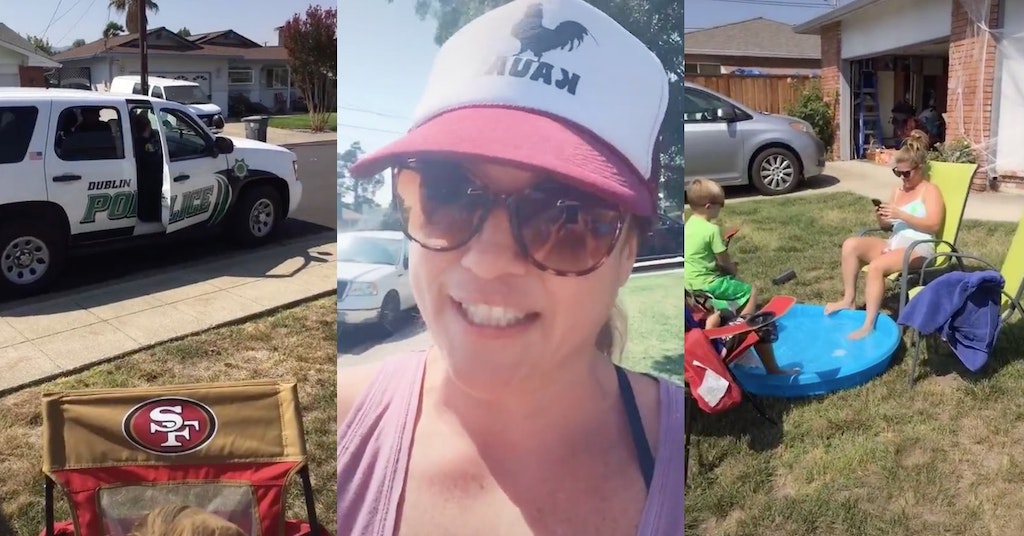 A California woman posted a video to TikTok sharing her disbelief after a neighbor called the cops on her and her roommate for having a “rowdy pool party.”

@LadyRaRoo caught the tail end of the cops leaving after very briefly swinging by their house to check on the “disturbance.”

She pans the camera over to the front lawn, where her roommate is sitting with her two young boys, cooling their feet off in a shallow kiddie pool.

“She drove off, and I smiled at her because I was just sitting on the front lawn, and she scowled at me hella hard,” @LadyRaRoo continued, referring to the neighbor who called the police. “And then, five minutes later, f—king cops show up. And the cops were laughing, they were like, ‘No, we got a call about a rowdy pool party, and we were expecting a bunch of teenagers with a real pool and you know, like, cannonballing and yelling with loud music and whatnot.’”

Some people sharing the original video across social media theorized that the woman was actually just mad because @LadyRaRoo and her roommate have a pro-LGBTQ, pro-Black Lives Matter sign on their lawn that says “Hate Has No Home Here.”

And while that may seem like a bit of a leap, a follow-up video suggests there actually may be something to it.

After the cops left, @LadyRaRoo says they continued to sit in front of the house with their kiddie pool, talking loudly about what had just happened.

“We yelled something out loud about ‘We don’t do anything illegal, so quit calling the cops on us,’ and [the neighbor’s] daughter happened to be walking by like, right at that moment, walking their dog, and she went in and tells her mom that we accosted her, or whatever,” she says.

The angry neighbor came out to confront them, and @LadyRaRoo says she asked her what it’s like to have so much hate in her heart.

“‘I don’t; I just don’t need a sign,’” the neighbor allegedly said, clearly making a reference to the sign in the front yard.

The reactions online were torn between relief that the police call didn’t go badly and disbelief that nosy neighbors are still out here using 911 for this kind of nonsense.

All’s well that ends well, supposedly, but it seems pretty likely that @LadyRaRoo and her roomie are going to keep having trouble with this aggressively obnoxious neighbor. Maybe someone should buy that woman a sign against hate after all.