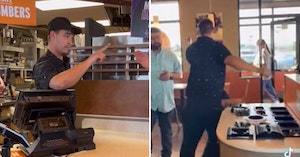 A dispute over Mexican pizza at a Taco Bell led to the spread of a video showing a high-level manager arguing with irate customers who came into a closed lobby and got their feelings hurt when he raised his voice to the old man who was cussing him out. The person filming took the customers’ side, though she did not appear to be with them, and further argued with the manager and threatened to send the video to “corporate.”

“I am corporate,” the manager replied, fulfilling a common fantasy of service industry managers everywhere.

When the person filming didn’t believe him, he turned and asked his employees to confirm his story, which they did with a chorus of exhausted “yeah” responses from people being paid to little to put up with rude customers.

The customers claimed that they spoke with someone on the phone who said that the lobby was open, but the manager countered that they didn’t speak to him and pointed out that he hung three signs on the building’s exterior saying otherwise. The signs also explained that they were out of Mexican pizzas, which appears to have started an altercation on the phone that the customers brought into this guy’s workplace.

Apparently, Taco Bell created a nightmare for their underpaid restaurant staff by removing the pizzas from their standard menu only to temporarily bring them back as a promotion, then not stocking enough Mexican pizzas.

The manager repeatedly tries to kick out the elderly man off screen, but the old guy continues to mouth off and drops the f-word, at which point the manager declares he won’t serve them and will refund their order. The young woman with the old guy tries to demand a cash refund when the card refund isn’t immediate, but is firmly rebuffed.

The next part of the video shows the manager trying to defend himself as the person filming and someone else say he shouldn’t raise his voice to elderly people, which he rejects. It then cuts to him physically seeing the rude customers out before returning to the counter and telling the TikTok user that she can film him all she wants.

“You know who you’re talking to?” the manager counters. “I am corporate.”

“Yeah, but you can’t raise your voice to customers,” says an off-screen man.

Workers can, in fact, raise their voice if they want to, and a whole lot of people who have had to work in food service and similar jobs are sick of the idea that folks on the clock should have to take any and all abuse dished out by awful customers. A lot of commenters are also baffled that any customers would cause such a scene over some Taco Bell Mexican pizza promotion.