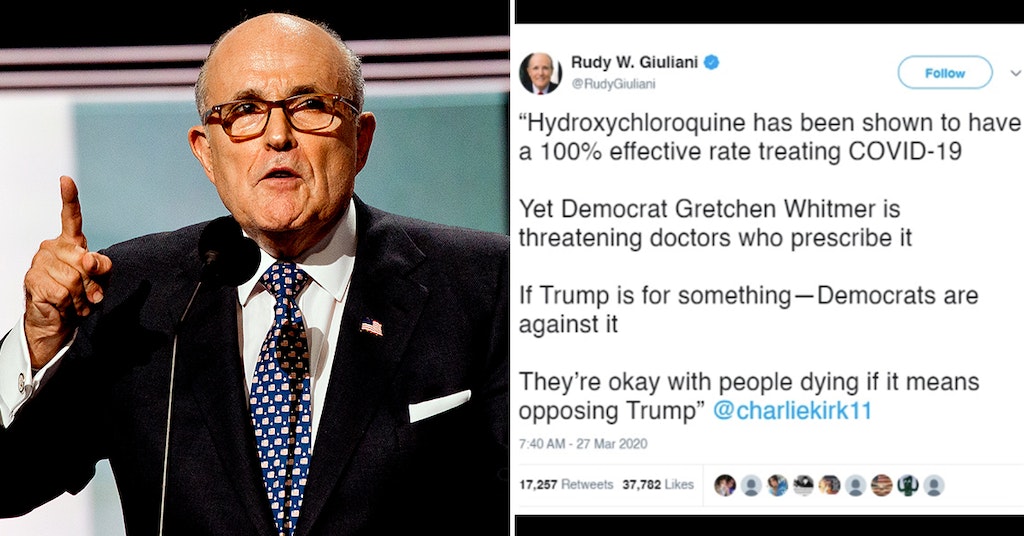 Twitter has received a lot of criticism for the way it handles things like white supremacists and the president of the United States. It seems as though the company is either unwilling or unable to do anything to stem the tide of hate speech and misinformation on its platform. But someone has finally gone too far for @Jack—former New York City Mayor and current deranged Trump sycophant Rudy Giuliani.

Mediaite reports that a tweet from Giuliani was deleted by Twitter for spreading Donald Trump’s claims that a drug called hydroxychloroquine could cure COVID-19. It read:

“Hydroxychloroquine has been shown to have a 100% effective rate treating COVID-19. Yet Democrat Gretchen Whitmer is threatening doctors who prescribe it. If Trump is for something —Democrats are against it. They’re okay with people dying if it means opposing Trump.” 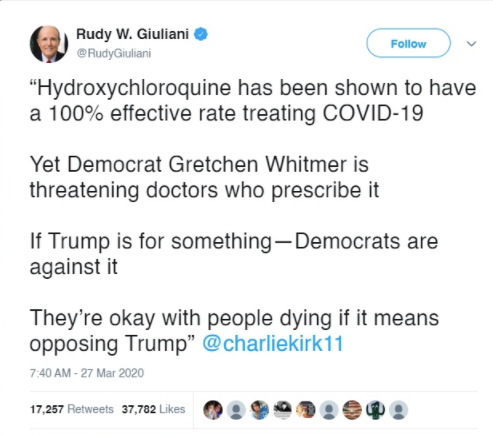 What’s especially weird about this tweet is that he is attributing it to Charlie Kirk, another Trump supporter, who tweeted the same thing. Giuliani decided not to just quote tweet or RT. Maybe it seems silly to focus on that, but wasn’t this guy supposed to a “cybersecurity expert” at some point? And he can’t work Twitter? 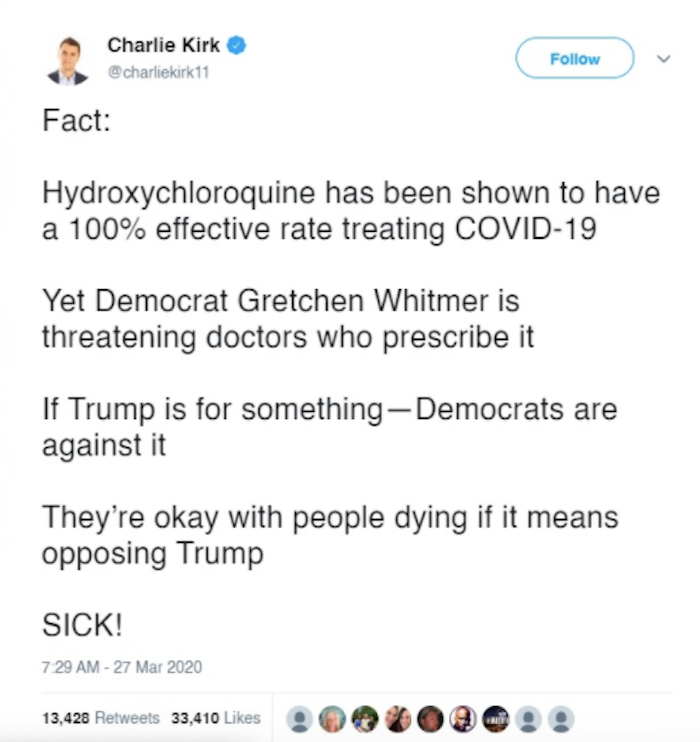 These erroneous claims are supposedly coming from the writing of conspiracy blogger Jim Hoft of Gateway Pundit, who also stated the drug has been proven 100% effective. It hasn’t. Some extremely limited studies have shown the drug helps somewhat, one showed it didn’t help at all, and none that showed it to be a cure.

Trump has made the proclamation on his own timeline that a mix of drugs can cure COVID-19. This was quickly refuted by doctors who say that self-administering these drugs can lead to heart arrhythmia that will get you faster than the virus.

Governor Whitmer of Michigan was targeted in the tweets because a letter from the Department of Licensing and Regulatory Affairs says it has gotten complaints that physicians in the state are “inappropriately prescribing hydroxychloroquine or chloroquine” to patients and friends “without a legitimate medical purpose.” That means people who actually need these drugs for life-threatening ailments—such as lupus and malaria—are facing a shortage.

The letter also warns that there is no proof these drugs can cure COVID-19:

Prescribing hydroxychloroquine or chloroquine without further proof of efficacy for treating COVID-19 or with the intent to stockpile the drug may create a shortage for patients with lupus, rheumatoid arthritis, or other ailments for which chloroquine and hydroxychloroquine are proven treatments. Reports of this conduct will be evaluated and may be further investigated for administrative action. Prescribing any kind of prescription must also be associated with medical documentation showing proof of the medical necessity and medical condition for which the patient is being treated. Again, these are drugs that have not been proven scientifically or medically to treat COVID-19.

Trump has made several negative statements about various governors, referring to Whitmer as “that woman in Michigan,” and even going so far as to imply he won’t allow aid to reach any states that aren’t nice enough to him. Maybe one of the cures we could try is deleting his entire Twitter account?