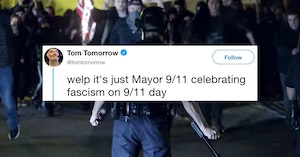 Rudy Giuliani was the mayor of New York City on September 11th, 2001, and to much of the country outside of New York he was considered something of a hero for steering the city through a really dark time in its history. To the people of New York, reviews are mixed. As Giuliani has aged and revealed himself to be a Trump-supporting crackpot with nightmare ideas, the reviews have become more negative.

This year, just before the anniversary of 9/11, Giuliani decided to ruin what’s left of the goodwill he has by sharing a short propaganda film on Twitter.

The video shows a police officer standing in front of a line of protestors, who light a flag on fire. As a creepy child’s voice sings the national anthem, we’re taken back through the officer’s history, his relationship to the flag as a soldier, a football player, and a child watching the flag get raised over a pile of rubble where the Twin Towers once stood. Then he takes out a baton, because he is about to split some American heads FOR AMERICA.

What a convincing argument for state violence. On the anniversary of so many deaths, Americans should be thinking about how the right to peacefully protest should be crushed and that the police force should be used to suppress opposition?

The whole thing gets even more absurd. This video is from a commercial produced by a t-shirt company that they claim they intended to run during the Super Bowl. In the ad’s YouTube post, they write in the caption:

This commercial was intended to be our commercial in the Big Game (you know the one). We weren’t denied or rejected by anyone, it was our own decision to not run it. In the end we just couldn’t take the big money risk.

Producing this piece of crap and then not paying to air it was sort of a stunt move. They company almost implies it was “banned,” which makes it even tastier bait for conservatives who want to feel like their idea of America is being attacked. So they can get out their baton, just like Mr. Skull Cracker.

This is not the start of a dystopian David Fincher movie about a cop who lost his mind (good guess!).

It's a "banned from the Super Bowl" ad that skirted the rules and got conservative media attention. He cut off the logo of the t-shirt company at the endhttps://t.co/gjWNfKYcvF

Giuliani got a lot of responses to sharing the video that are pretty on point:

This is a day of unity in mourning and rememberance and you have chosen a message of division and fear. Now we have yet one more thing to mourn.

America has now gotten an ample view of why.

To be clear, I think this video is gross. It displays the worst kind of division and shows the exact opposite of what we expect of and aspire our first responders to be. Giuliani should be embarrassed that he shared something so disgusting and tries to connect it to today.

400 firefighters died because you wanted to save money on radios and scores more died because you said the air was safe. So of course you’re still here, still kicking, using today to sell fashy cargo pants.

Constant reminder that Republicans haven’t met a tragedy yet that they won’t rush to politicize, while sitting on a high horse claiming that’s what everyone else is doing. He’s using a moment that actually brought us briefly together to tear us back apart.

Everyone reflects on 9/11 and the losses of that day differently, but most probably don’t see it as a reminder to turn on one another. Or buy Grunt Style products.