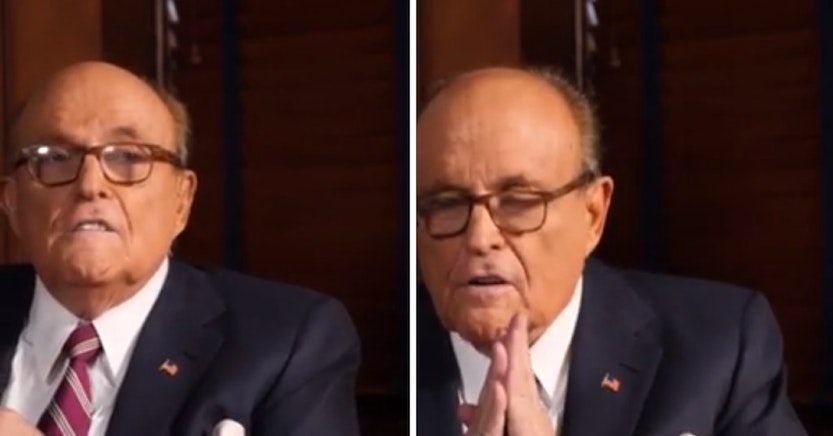 Political disaster Rudy Giuliani managed yet another unfortunate technological screw-up that made him look terrible to the entire world when he somehow uploaded a video of himself being extremely racist. After interviewing former White House Press Secretary Sean Spicer for his podcast, the camera kept rolling and caught Giuliani doing a gross imitation of a Chinese accent and bowing after for some reason telling his assistant that she “you’re gonna be the most famous model in China.”

This assistant is Jayne Zirkle, who is white, but the more important question is how Rudy or his team managed to upload the entire video to his YouTube channel without cutting out the racist parts.

“Ah, get me Jayne Zirkle,” Rudy says in a fake Chinese accent. He continues to mutter about Zirkle in this offensive manner for a full 20 seconds before he takes the racism even further by doing some little bows with his hands together, possibly because everyone was trying to ignore him instead of laughing.

The YouTube video is now set to private, but reporters for the Daily Beast caught the clip at the end and saved it for the whole world to see before Rudy’s team could stop them. Giuliani has not yet issued a comment on his rank behavior, and if his previous screw-ups are any blueprint, he probably won’t.

This news broke just a day before Giuliani’s own daughter published a piece in Vanity Fair begging people to vote for Joe Biden and Kamala Harris. Caroline Rose Giuliani mostly drags Donald Trump in her plea, but also shares how intensely her father defended Republicans and their most bigoted platforms over the years, even with his own daughter.

“When I tried to explain my belief that you don’t get to be considered benevolent on LGBTQ+ rights just because you have gay friends but don’t support gay marriage, I distinctly remember him firing back with an intensity fit for an opposing politician rather than one’s child,” she wrote.

LGBTQ+ rights weren’t the only issued they “butted heads” on, however. One issue she mentioned is particularly relevant to the video.

“Over the years other subjects like racial sensitivity (or lack thereof), sexism, policing, and the social safety net have all risen to this boiling point in me.”

At this point, it’s hard for Rudy’s reputation to get any worse, but that doesn’t make his racist actions any less appalling.