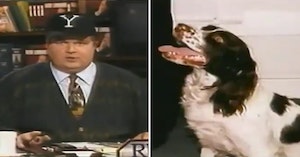 Right-wing radio personality Rush Limbaugh died of lung cancer today and the internet has become a grim parade of all the horrible things he said and did during his career. Just one of those examples is a now-viral clip of him comparing Chelsea Clinton, who was 13 at the time, to a dog in response to people saying that the 13-year-old child was cute.

In the clip, after emphasizing the words “cute kid” to refer to Chelsea, he puts up a photo of a dog before switching to a blurry photo of the teen in braces.

This was not the only time he pulled this stunt, either. Another time, he set up the “joke” by talking about the White House cat from the Clinton administration, saying “did you know there is also a White House dog?” He then put up a photo of Chelsea.

Limbaugh claimed this was an “accident,” but the fact that it happened more than once clearly proves it a lie, not to mention the laughs it got from his audience.

Attacking White House or any other children is typically considered a low move, but it was par for the course when it came to Limbaugh. Remember the outrage from the right when Trump critics even commented on Barron being tall? Anyway.

As Limbaugh’s fans shower him with praise, people who do not approve of attacking the appearance of 13-year-old girls have taken the opportunity to remind them of the character of the man they so admire.

Though a good example of Limbaugh’s consistent cruelty, it’s far from the only example. Others have brought up his strange accusations that Michael J. Fox was for some reason faking having Parkinson’s disease and his old “AIDS Update” segment in which he mocked people for dying of the disease.

Limbaugh’s death has revived debate over whether it’s ever okay to celebrate someone’s passing, no matter how completely awful they might have been in life or how much damage they did to human society. However, most seem to agree that outside of overt celebration, it’s okay to bring up all the terrible things someone said and did during their life, because your legacy is what you make it.