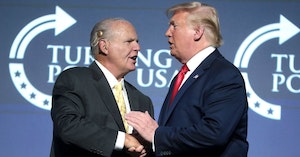 Presidential Medal of Freedom recipient Rush Limbaugh may be going for more awards from Donald Trump as he uses his radio show to spread a completely baseless and fairly racist conspiracy theory that the coronavirus is some kind of bioweapon created by the Chinese government. You know, like Russia and fentanyl.

“It probably is a ChiCom laboratory experiment that is in the process of being weaponized,” Limbaugh said with no evidence. “All superpower nations weaponize bioweapons. They experiment with them. The Russians, for example, have weaponized fentanyl.”

“ChiCom,” by the way, is a disparaging term used by people like Rush Limbaugh to refer to “Communist China.”

And yet, somehow, this “bioweapon” is also nothing more than “the common cold,” according to the radio show host. But whether it’s as trivial as a cold or as dangerous as fentanyl (fact check: it’s neither), he thinks that its purpose is to attack Donald Trump and all of capitalism.

Rush Limbaugh on coronavirus: ‘The common cold’ that’s being "weaponized" against Trump https://t.co/C84u53zxw5

“I think the coronavirus is an effort to get Trump,” he concluded. “It’s one of the latest in a long line of efforts that the drive-by media is making to somehow say that Trump and capitalism are destroying America and destroying the world.”

So the coronavirus, which everyone knows originated in China, the country which Limbaugh still thinks is a communist one, is going to make people think that capitalism is bad?

These words coming out of Limbaugh’s mouth are presumably inspired by the reports that fears of the illness are having a negative impact on global stock markets, with the Dow dropping by over 1,000 points on Monday and close to 900 points today.

Rush Limbaugh said the coronavirus was made in a Chinese lab and is being weaponized to hurt the U.S. economy and take down Trump.

The guy is a few tacos short of a combo platter.

“It came from a country that Bernie Sanders wants to turn the United States into a mirror image of: Communist China,” he rambled. “That’s where it came from. It didn’t come from an American lab. It didn’t escape from an American research lab. It hasn’t been spread by Americans. It starts out in a communist country.”

Then why would anyone blame it on capitalism? Unless China isn’t actually a communist country at all?

CORONAVIRUS UPDATE:
– Stock market crashing
– 40-70% of humans will be infected this year
– 15% of all people over 80 may die
– Rush Limbaugh thinks it's a liberal plot to take down Trump

The whole human race could die out and all they'd worry about is ruling over the ashes.

As absurd as the man is being, conspiracies theories like this are at least partially responsible for the increasing reports of racist harassment targeting Asian individuals and businesses. Businesses such as Chinese restaurants in Australia are even reporting a decline in customer traffic since the coronavirus became big news.

In reality, the virus emerged and spread just like all novel viruses without help from any government. It’s highly contagious and can be lethal, particularly among those age 80 and older, but has a low mortality rate among healthy adults. Additionally, few healthy children seem to catch the illness.

Rush Limbaugh is telling his listeners not to worry about the coronavirus COVID-19 because "it's just the common cold" and "there's a 98% survival rate."

Somehow, Limbaugh has managed to both undermine and overstate the impact of the coronavirus. It would be impressive if it wasn’t so damaging.