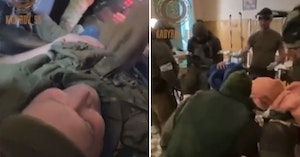 A Ukrainian journalist has claimed that commander of the invading Russian forces into Ukraine was wounded by a tank that ran over his legs, with Western officials now reporting that he died from his injuries. The twist is that the tank was allegedly driven by his own troops, attacking him in retaliation for the massive losses suffered by the Russian military after they were surprised by the massive Ukrainian resistance to the invasion.

Former NBC executive Mike Sington reports that this claim was made by journalist Roman Tsymbaliuk and posted footage of the commander, Colonel Yuri Medvedev, being carried on a stretcher with blankets strapped over his legs.

According to Ukrainian sources, the 37th Russian infantry brigade operating near Kyiv suffered around 50 percent losses — a massive loss that would likely render the entire brigade useless. Medvedev was blamed for the deaths of these soldiers in what appears to be a larger trend of Russian forces turning on their commanders or deserting the military as leadership bungled what was supposed to be a three-day “operation.”

Whether or not Medvedev was actually killed or just suffered broken legs and/or crushed feet has been the subject of some debate, but if the attack was indeed part of a mutiny, the implications for Putin’s invasion are not good for Putin.

The Daily Mail reported that an unnamed “Western official” believes him to be dead and that it is true that the tank was driven by at least one Russian soldier.

“He was killed by his own troops we believe as a consequence of the scale of losses that had been taken by his brigade,” the official allegedly stated. “That gives an insight into some of the morale challenges the Russian forces are having.”

The challenges in question have been numerous, starting with Russian forces largely being lied to about why they were going to Ukraine and what to expect, then being driven back by resistance when they weren’t getting so lost they had to abandon their own tanks. After which, random Ukrainians started to steal them.

Widespread reports are now stating that Russia has suffered massive losses potentially totaling around 20 percent of their total forces. Other reports state that 20 out of 120 battalions sent by Putin have been effectively destroyed by Ukrainian resistance, though the Russian president may be preparing to send in 10 more. Additionally, there have been claims that Russian soldiers are deserting in high numbers and suffering from frostbite due to a lack of basic warm clothing.

Information like this is difficult to confirm, but there’s no ignoring the multiple videos of Russian soldiers and civilians alike complaining that the young men sent to Ukraine are being used as “cannon fodder.” NATO officials stated this week that they estimate around 15,000 Russian casualties in the four weeks since the invasion began.

It’s gotten to the point that Russian officials are now beginning to suggest that bringing all of Ukraine low was never their goal and that they only wanted to draw Ukrainian forces away from the Donbas region so that they could “liberate” it.

“Russia had never intended to capture Kyiv, Kharkiv and other cities, the generals said – these are not setbacks in other words, it’s all part of the plan,” reported Financial Times correspondent Polina Ivanova. “And the plan was to distract Ukrainian forces while Russia/ Donetsk/ Luhansk made territorial gains in the east.”