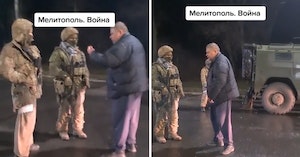 A new video of yet another Ukrainian resident standing up to Russian invaders is spreading online, allegedly showing a “grandpa” who is actually Russian but is living in Ukraine, as happens often with the neighboring countries, telling off a small group of invading soldiers in their own language. The older man has not been identified, but multiple sources have reported on the video as appearing to be legitimate, saying that the confrontation occurred in the city of Melitopol in southeastern Ukraine.

“What the f–k are you doing here?” he says to the rifle-carrying soldiers according to people who have translated. “I am Russian too, but I live in this state. You have your country, we have ours. Don’t you have problems in your country to solve? Are you all rich there, as in the Emirates? You’re just puppets.”

This video would seem to dispute claims from Russian state-controlled media saying that the people of Melitopol greeted them warmly as they rolled in, with the Russian defense ministry even claiming that “elderly citizens took to the streets [waving] red flags.” However, Western sources have disputed even the assertion that Russia took and now controls the city, and additional video has emerged of Ukrainian citizens using their own bodies to block approaching Russian military convoys and throwing themselves down in front of tanks.

“Even Melitopol, which the Russians are claiming to have taken but we can’t see anything to substantiate that, are all still in Ukrainian hands,” said British armed forces minister James Heappey on Saturday.

This man isn’t the first Ukraine resident to be seen standing up to Russian soldiers, getting in their faces and telling them off. Early in the invasion, a Ukrainian woman was filmed walking up to similar armed soldiers and urging them to keep sunflower seeds in their pockets so that when they were killed, flowers would grow where their bodies fell. This was widely lauded as one of the coldest things people had ever heard.

Elsewhere, confirmed grandmothers are hard at work making Molotov cocktails for resistance forces, 80-year-olds are signing up for the Ukrainian army, and one Russian soldier was filmed crying on some steps as a whole group of Ukrainians berated him for being there. Some have noted that Russia uses a mandatory draft system, with at least one year of military service being required from all Russian between ages 18 and 27.

This may be a large part of the reason that the soldiers in videos like these have been so tolerant, and why rumors have abounded of Russian forces being misinformed by leadership, abandoning their vehicles and other equipment, and surrendering when met with Ukrainian resistance.