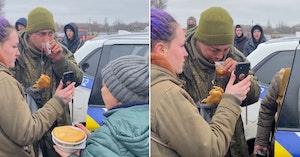 A moving video and testament to the futility and absurdity of war is going viral online for showing a starving Russian soldier who reportedly surrendered to Ukrainians and being given food and tea while a woman helps him place a video call to his mother. As the soldier eagerly eats and drinks, he begins to cry upon seeing his mom on the phone, kissing his fingers as a gesture of affection.

According to a translation from someone who claimed to be a native Russian, the man speaking in the video was saying that the young soldier had no idea where he was being sent or why when he was put on a convoy into Ukraine. He further called upon Russian mothers and other civilians to stand up against the war and keep their children home.

“They’re giving their kids away as cannon fodder,” he says. “They don’t know where they are driving.”

The woman holding the phone addresses the young man’s mother, calling her Natasha, tells her that is son is safe and being cared for and that they will continue to communicated with her. As he cries, the young woman places her hand on his shoulder to comfort him.

The rate at which the Russian soldier is eating and drinking suggests he hadn’t been given any sustenance in quite some time.

Although misinformation has made it difficult to figure out what is real and what is propaganda, there have been numerous reports suggesting that many of the rank-and-file Russian soldiers are entirely uninformed about what is going on, possibly not even knowing that they’re invading Ukraine. Other translations of the man speaking on this video report that he’s saying Russian forces are being given old maps of the region and are getting lost and confused.

This is not even the first video allegedly showing Russian soldiers crying somewhere in Ukraine, officially captured or not, and there have been many reports of Russian forces fleeing or surrendering en masse upon meeting Ukrainian resistance.

Ukraine appears to be leaning into this apparently massive morale problem among the invaders. A Ukrainian military website has even declared that the country will give captured Russian soldiers directly back to their mothers if said moms will travel to Kyiv to get them.

“It was decided to give the captured Russian soldiers to their mothers if they come for them to Ukraine, to Kiev,” a translation of the website text reads.

It then gives the mothers detailed directions for contacting and confirming their sons are captured and safe, and then for a route to Kyiv, going through Belarus and Poland to reach a safe checkpoint into Ukraine.

“There you will be met and escorted to Kyiv, where they will give you your son,” it says. “We, Ukrainians, unlike Putin’s fascists, do not fight mothers and their captive children.”

This level of compassion and caring from people currently facing a massive armed invasion of their home has proved to be very popular with the international community.