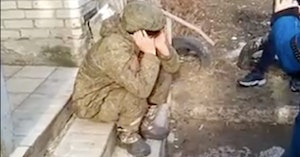 Russian forces have invaded Ukraine and like virtually all wars, it’s being fought by a lot of very young people. The Ukrainian forces are a mix of people who have been conscripted and volunteers, and all of them know they’re fighting for the fate of their country and homes. On the Russian side, they know they’re fighting because they’re being told to fight (or, according to some accounts, not even realizing they’re being sent into war), and that isn’t the same motivation.

A viral video shows a young Russian soldier weeping as citizens of Ukrainian town berate him for his presence. Their anger is completely understandable, but it’s pretty clear that this guy doesn’t want to be here either, and not just because he seems to have been captured.

The Twitter user who share the video, @davenewworld_2, also shared the law in Russia around entering the army.

“Conscription in Russia is a 12-month draft, which is mandatory for all male citizens age 18–27…The mandatory term of service was reduced from two years to one year in 2007 and 2008. Avoiding the draft is a felony under Russian criminal code.”

Many of the responses seem to be sympathetic to the young man and his plight. There have been reports that many of the soldiers fighting were not told they were going to war, but that they were conducting a “special military operation” and have been cut off in communication from their families.

The war has continued through the weekend, with Ukraine giving a good fight back, but war never really seems to have any winners.