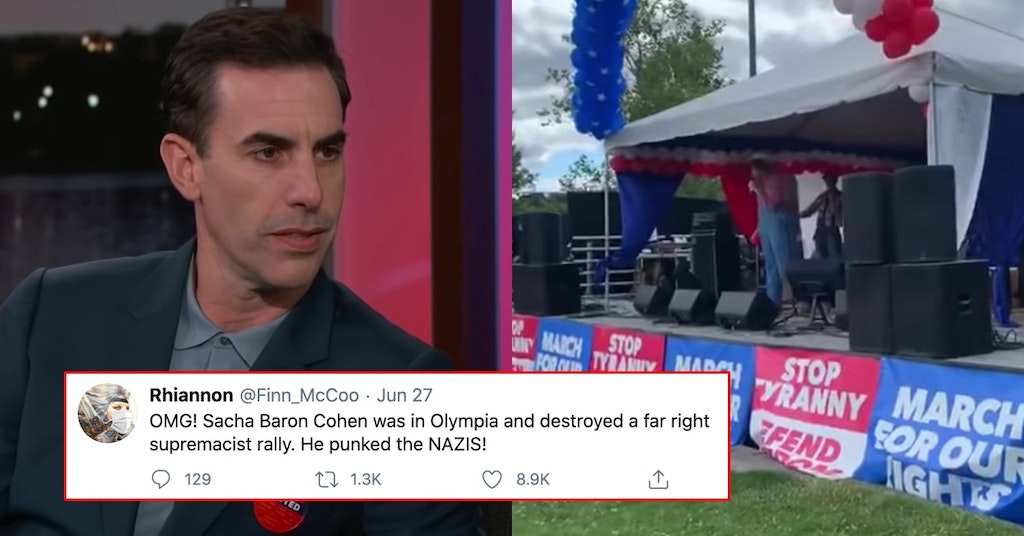 
It’s a deeply divisive election year, the President of the United States keeps calling our worldwide pandemic the “Chinese Virus,” and Black Lives Matter protests are bringing out all the racists.

So we really, really should have expected Sacha Baron Cohen to pull some sort of prank in the middle of all of this sooner or later.

The Borat comedian finally made his appearance this weekend by infiltrating a “March for Our Rights 3” rally organized by far right-wing militia Washington Three Percenters, and getting them to sing racist and threatening lyrics against Democrat leaders.

According to organizers, a band was added at the last minute by a group called “Back to Work USA” who stepped in to sponsor the event. The band, of course, was Cohen, as was the sponsor.

At times, he alternated and asked audience members if they would rather inject them with the flu or “Chop them up like the Saudis do.”

Other lyrics referred to the coronavirus as a liberal hoax and took aim at the World Health Organization and science in general.

The organizer interviewed above said that once “the band” began performing racist lyrics, they tried to shut them down, but security — hired by Cohen — blocked them from going near the stage or the generators that would have allowed them to cut power to the platform.

While a Facebook post from city council member James Connor Blair claims that the crowd “realized what [Cohen] was saying, and turned on him,” one video recording shows that the audience sang along with the comedian for at least eight minutes.

Before discovering that this whole thing was a prank by Cohen, one of the organizers also went on a rant insisting that the Democratic Party was undoubtedly "pulling the strings."

The internet was completely floored by the enormity of the prank, as well as the implications.

But perhaps the best part is this behind the scenes picture of the interviewer from the first video up top, alongside his camera crew.

Every time, Cohen. You pull it off every time.