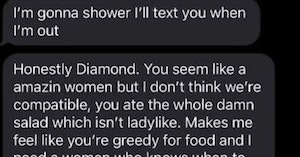 ‘How Could You Eat That Much:’ Man Furious After Date Orders (And Eats) A Salad

In theory, dating is something fun you do to meet new people and try to find someone romantically compatible to spend your time with. In practice, it often feels like little more than an exercise in masochism.

Text messages currently making the rounds on social media are currently reminding women that no matter what they do, some guys are going to find a way to find fault.

It’s unclear where the screenshot originated, but it shows a conversation between Neil and Diamond (hilarious) after they had gone on their first dinner date. After a quick back-and-forth of pleasantries, suggesting that both were feeling the date enough to keep talking, Neil boldly dropped a complaint out of left field regarding their time together.

“Honestly Diamond. You seem like a amazin [woman] but I don’t think we’re compatible, you at the whole damn salad which isn’t ladylike,” he wrote. “Makes me feel like you’re greedy for food and I need a [woman] who knows when to stop eating.”

He goes on to boast about going to the gym and meal prepping every day, and suggests that, because she ate one entire salad for dinner, Diamond will likely “be overweight in the near future.”

“I still want to hang out but that bothered me. I almost exploded. I love your vibe and energy tho,” he said, before demanding to know how she could “eat that much.”

Men who get angry about women actually eating when they take them out to dinner are a weird breed as it is, but getting angry about eating a salad has got to be a new level of douchebro accomplishment unlocked.

And while we’re critiquing people, Neil doesn’t exactly sound like a catch himself.

Wherever Diamond is now, hopefully she’s enjoying all the salads she wants, with literally anyone else but this guy sitting across from her at the table.