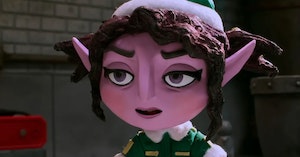 The trailer for a new Christmas show starring Seth Rogen and Sarah Silverman is bringing out the racist trolls.

Santa Inc. envisions the North Pole as a town like any other, just centered around its resident celebrity, Santa Claus (voiced by Rogen). The plot revolves around an elf named Candy (voiced by Silverman) who wants to take over for the big guy when his time as the hero of Christmas is finally up.

There have been plenty of movies about replacing Santa Claus over the years, including fairly irreverent takes. Not, perhaps, quite as irreverent as a Santa series that talks about Mr. Claus’s dick and features multiple scenes of urination in the trailer alone, but still, in theory, this isn’t new ground.

What’s different here is that the show seems to focus on how “the position of Santa has mostly been a white man’s game,” but now a female elf wants to find a way to break into the boy’s club — and that both of the leads are voiced by Jewish actors.

Suddenly, this special is yet another attack on Christmas, with racists claiming the story is anti-white, anti-Christian, and “too woke.”

The comment section has been disabled after the vitriol, according to the Daily Dot, “clearly [violated] YouTube’s policies prohibiting hate speech.”

But the racism and hate made their way to Twitter as well.

The Daily Dot also noted that far-right groups have been circulating a list of producers and voice actors for the series with notation for which people are Jewish or Black and support Black Lives Matter, though it’s unclear if the list is being used for anything in particular.

The series — which was not created by Rogen, despite many of the antisemites claiming otherwise — premieres on HBO Max on December 2.