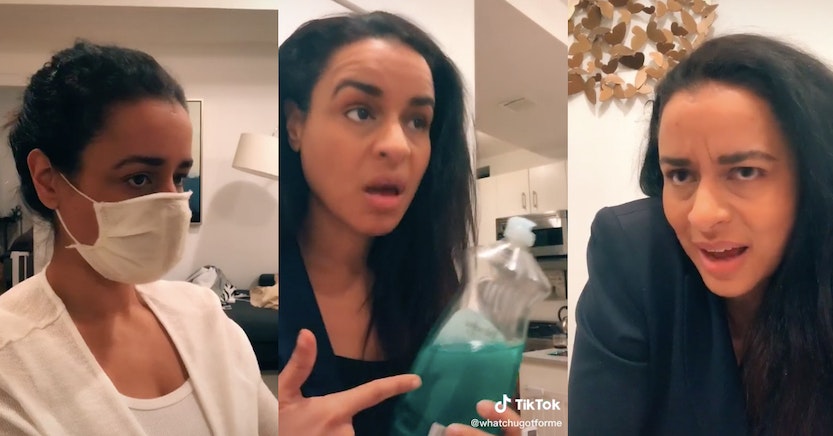 Listening to President Trump speak has become unbearable for some of us. His perpetual disinterest in facts, his condescending outlook towards everyone who isn’t a rich white straight male who agrees with everything he says, and his obvious need to hear himself talk even if he isn’t saying anything that matters just makes every moment he’s mic’ed up the human equivalent of nails on a chalkboard.

But it’s also important to stay informed, so sometimes we make the choice to suffer through his words all the same, or at least clips of his incoherent, meandering speeches.

Fortunately, there may be a better way.

Comedian Sarah Cooper has been reenacting some of Trump’s most ridiculous newsworthy moments in a hilarious series of videos. She manages to point out the inevitable absurdities while exclusively using the actual audio of the president’s comments, making her videos funny, informative, and, miraculously, far more bearable than just straight up watching Trump himself deliver the same words.

Cooper’s videos are constantly going viral, shared across all social media and across the political spectrum.

“I saw people saying they shared [my videos] with Trump supporters and for once there is nothing they can say,” she recently told The Guardian. “The clip is literally, completely unedited — I haven’t edited [the audio] at all — so what can they say to argue with it?”

And that’s the basis of Cooper’s intent with the videos, as well as what makes them simultaneously compelling and terrifying — they expose the president’s words as the babbling nonsense they so often are.

“I feel like we’ve been gaslighted for years, being told it is totally normal for a president to say things like this,” she said. “It is a very validating thing to see something remind you that, no, this is actually ridiculous and we can all agree on that.”

Here are some of Cooper’s best Trump mockeries, so you can catch up on your news or just start your day off with a good laugh. Followed by a good cry, because this is actually the leader of the United States of America and oh god we are so screwed.

Don’t forget to take your daily dose of hydroxychloroquine.

We wouldn’t have so many COVID-19 cases if we just didn’t test people!

“I tested positively toward negative.”

How does testing work again?

People are dying, but let’s talk about the economy, which is totally super great.

You can check out more of Cooper’s videos, including more impressions of Trump as well as poking fun at other ridiculous people, over on TikTok or Twitter.