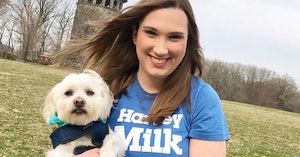 In 2018, LGBTQ candidates were elected to office in record numbers. The last two years have proven that wasn’t a one-off deal, with LGBTQ politicians continuing to win races across all levels throughout the United States.

And now Sarah McBride is poised to make history this coming January as the first openly trans state Senator and the highest-ranking trans official in the entire country after she won her election in Delaware earlier this month.

It’s a massive win for representation, breaking an important barrier that will hopefully continue to pave the way for more LGBTQ candidates to be not only welcome but expected in politics.

But breaking barriers doesn’t mean that prejudice magically disappears. There are still too many people in this country and in this world who proudly put their transphobia on display, and some of the responses to McBride’s win on social media are, unsurprisingly, pretty terrible.

At least one person took it upon themselves to slide into her DMs to hassle her, but McBride wasn’t having it. She took their tired bigotry down swiftly and without sinking anywhere near their level, and then shared the short conversation with her Twitter followers.

“I am confused, are you a boy or girl?” the person asked, an age-old jab at trans people that it’s hard to believe anyone still thinks is an effective insult.

But McBride had it covered all the same. “I’m a senator,” she replied.

The epic mic drop and refusal to take any transphobic nonsense from some rando was immediately applauded by people on Twitter.

And the appreciative memes and jokes rolled in.

Now, let’s hope McBride takes this kind of bite straight to the Senate!