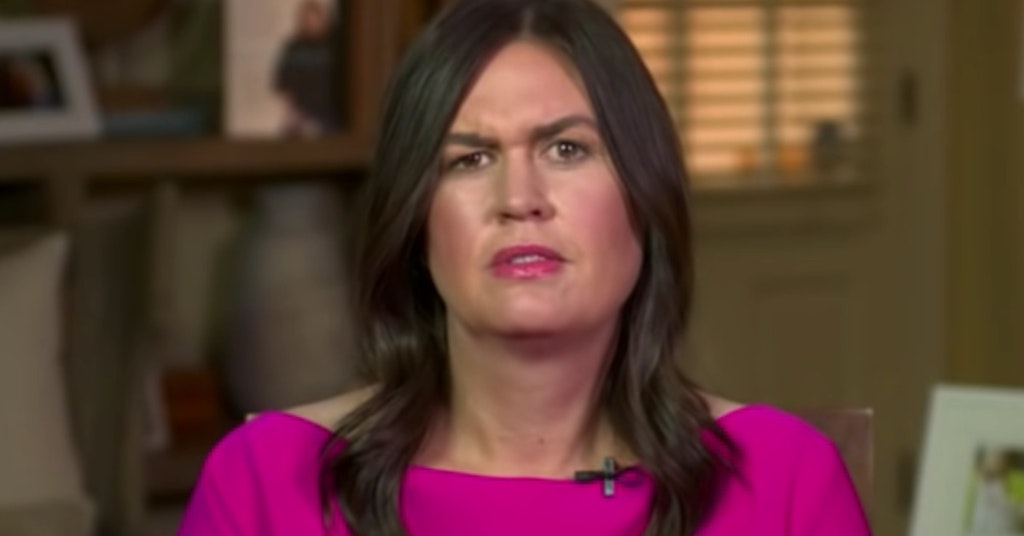 
Getting called on by a teacher in school only to be thoroughly embarrassed for not having the correct answer is an experience just about everyone has lived through — but for Sarah Sanders, the memory is pretty fresh.

Sanders, one of the many who served as President Trump’s Press Secretary during his short four years in office, has been getting schooled in the meaning of the First Amendment by a ton of people after tweeting out this unfortunate gem:

While Sanders may not have explicitly tweeted about the First Amendment, that’s been the major talking point for many high profile Republicans in the past week.

Whether they’re mad about Trump getting booted from Twitter or Parler getting booted from it’s hosting platform or, in this case, mad about Twitter finally cracking down on QAnon extremist accounts which resulted in a hilarious mass exodus of the GOP’s followers, they all believe this is somehow a violation of their First Amendment rights.

The First Amendment, among other things, stops the government from censoring a person’s speech. It does not stop private companies from ejecting users for breaching their terms of service, nor does it protect GOP politicians from losing Twitter followers.

Sanders herself alluded to believing otherwise in the tweet when she claimed that “the radical left” is trying to “censor, or silence the American people” (as usual, pretending that only conservatives are True Americans).

One of the many, many people who pointed this out to Sanders was a teacher at her former high school.

“You were a student at Little Rock Central High when I taught AP Government there, but you didn’t take the advanced class,” Dana D. Deree wrote in a now-deleted tweet. “If you had, maybe you would better understand the First Amendment and the difference between limits on government and freedoms for private individuals.”

He also posited that Sanders, whose identity is largely staked in her religion, like many other Republican politicians, clearly didn’t learn Sunday School lessons either.

Of course, plenty of other people had some choice words for Sanders as she tried to rally support against the United States turning into China in an amazing use of hyperbole.

Well, at least we know what their priorities are.