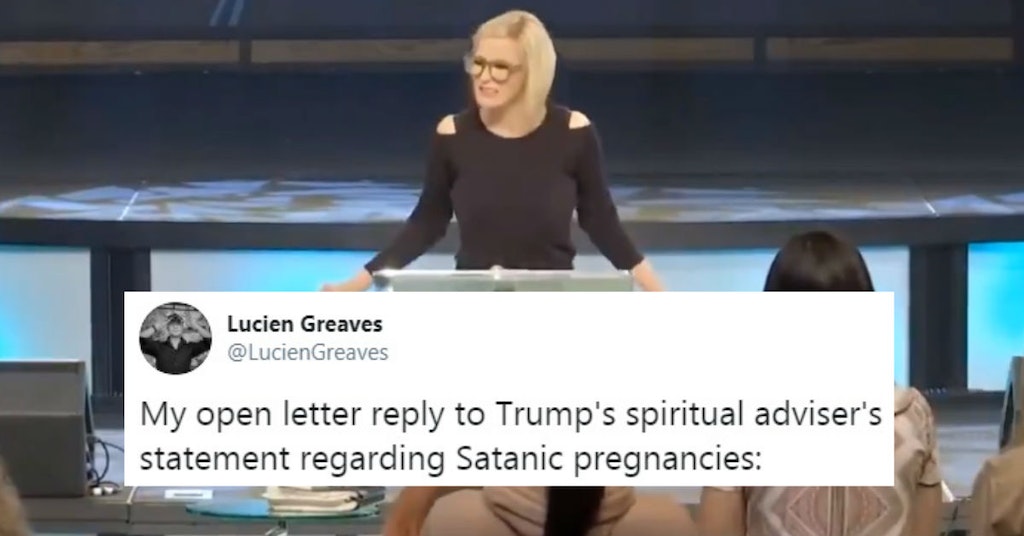 The Satanic Temple is taking the latest bit of absolute absurdity from Donald Trump’s spiritual adviser Pastor Paula White with good humor in spite of the fact that what she “prayed” for was horrifying. Pastor White literally prayed to God to cause what she calls “Satanic pregnancies” to miscarry. Is this the same God that says abortion is wrong?

Presidential spiritual adviser Paula White takes authority over the marine kingdom, the animal kingdom, and all "satanic pregnancies" that seek to harm Trump or the church. pic.twitter.com/pmrJEIxCHk

Glossing over the part where she railed against both the animal kingdom (of which humans are a part) and, more specifically, the marine kingdom, by the end of this rapid and bizarre prayer, White actually calls on God to abort all “Satanic pregnancies,” whatever those are.

“In the name of Jesus, we command all Satanic pregnancies to miscarry right now,” says White. “We declare that anything that has been conceived in Satanic wombs, that it’ll miscarry, it will not be able to carry forth any plan of destruction, any plan of harm.”

In response, Satanic Temple co-founder and spokesperson Lucien Greaves published an open letter to White thanking her for her miscarriage prayer considering how hard it is to access safe and affordable abortion services in the U.S. these days.

"I am writing to ask you to take a bolder step in the name of your faith, and lend your support to our Religious Reproductive Rights campaign which seeks to invoke religious exemptions from abortion restrictions on behalf of Satanists." – @LucienGreaves https://t.co/NgibvcayQE

“Dear Pastor White, Greetings from The Satanic Temple (TST)! We were very pleased this weekend to learn that you had recently publicly prayed for God to induce miscarriages in Satanic pregnancies,” Greaves wrote.

“At a time in which Satanists have had to fight desperately to retain their bodily autonomy in the face of increasingly restrictive anti-abortion laws, we are glad that your ‘logic’ must necessarily lead you to support unrestricted abortion access for Satanists seeking to end unwanted pregnancies!”

Greaves even went so far as to taunt White with some choice statistics about who gets the most abortions in the U.S.

“As you know, more than half of all abortions in the United States are sought by Christian women, while 38% are sought by the nonreligious, and only 8% are sought by women who belong to a non-Christian religion. So it is especially forward-thinking of you to single out Satanists as deserving of expressing the reproductive freedoms they champion.”

Greaves finished by calling on White to donate $5,000 to pay for 10 of their members’ abortion fees, which wouldn’t be much of a financial burden since her net worth is about $5 million.

The Satanic Temple has been an active voice in favor of protecting the right to choose and generally standing against right-wing attacks on human rights, particularly in the era of President Trump. Despite any bad press that Satanists have received in the past, many people appreciate their efforts.

Hilarious! Considering most of whom they are referring to believe in non of that shit. Seems like they’re the only ones that are insane.

I’m a pastor, and I just want to thank you for being more committed to the work of justice than many of my peers.

“There is more ethical quandary in a chicken sandwich than in a first-trimester abortion.” I love this so much 🖤🖤

Just when I think I couldn’t be more proud of you, you write this superbly elegant letter in response to a verbal attack. You are a true genius.