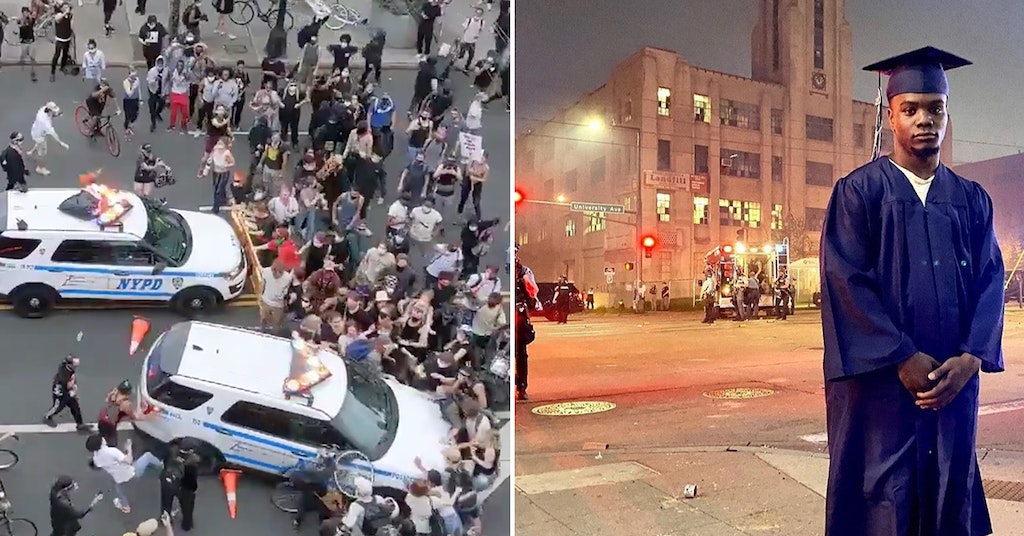 30 Scenes From George Floyd Protests Across The Nation

For the past several days and nights, protests have sprung up in numerous cities against police brutality and state violence against black men and women. They began in Minneapolis, where a man named George Floyd was killed by Officer Derek Chauvin, who leaned on Floyd’s throat for eight minutes as he begged to be released, saying he could not breathe. The horrific scene was caught on tape and widely shared. As peaceful protesters were met with even more violence, including tear gas, pepper spray, and rubber bullets, tensions exploded. A police precinct was taken over and set on fire. Riots and looting took over many areas.

Soon the city was put under a curfew, but it was too late to quell the rebellion. People all across the U.S. are fed up with the violence perpetrated by cops, especially racially motivated attacks against black citizens. Protests have sprung up in almost every state, in numerous cities. While most of these protests have started out as peaceful marches and gatherings, many have escalated as militarized police forces turn their weapons on the people, seemingly with impunity. Journalists have been arrested and targeted, even while cameras are running.

This is in stark contrast to how white lockdown protestors screaming the face of police over wanting haircuts were treated:

There is a stark contrast of enforcement responses to anti-lockdown #protests where armed white civilians stormed gov’t buildings & others are on camera shoving police vs. nationwide #protests against police violence, where targeted arrests & use of force are deployed by police. https://t.co/rCcqBR9O7C

It’s unclear how things will end, but after months of lockdown and over 100,000 people dead of a virus the government has failed to contain, plus a looming depression, people are not going to be placated by platitudes anymore. Here are some of the startling and incredible scenes of protests from around the world:

1. NYPD driving into a crowd

Police need to learn restraint. This is not restraint. https://t.co/PctrPwVaLW

I cannot believe what I just witnessed. They pulled up onto the square with a police siren on and did this. #Louisville pic.twitter.com/65o2lgZCJh

Wow. Look at the black people begging them to stop. https://t.co/5KZvb2dSGk

4. Protestors blocking a highway in Austin

When they built I-35 they deliberately ran it through middle class black neighborhoods in order to destroy them. https://t.co/n7Q7S0BlgV

If you are from central AR you know that 630 represents the segregation and redlining that still exists in Little Rock, 60 years after LR Nine and the civil rights movement. This is monumental. https://t.co/gBv0lKQ3Ko

6. John Cusack getting hit with batons

Cops didn’t like me filming the burning car so they came at me with batons. Hitting my bike.
Ahhm herea the audio pic.twitter.com/tfaOoVCw5v

7. MPD shooting paint canisters at people on their porches

8. Cop pulling off protestor’s mask to pepper spray him

Salt Lake City cops shove down an elderly man with a cane for the crime of standing along the street: pic.twitter.com/PCLkHqQtJg

This was beautiful … absolutely beautiful

This thing went sideways once the cops tried to stop the march from getting into Beverly Hills going west of Fairfax and 3rd pic.twitter.com/6Y2gl4tcLW

12. Building once used as a slave market set on fire in Fayetteville

it’s called the market house because that’s where people were sold. imagine how haunted a place like that is. how much sorrow lives in the soil. inhumanity is built into its very bedrock. burn it to the ground. https://t.co/EneRAXqJsD

Protestors in Nashville have toppled the statue at the State Capitol of Edward Carmack, a politician and newspaperman who denounced Ida B. Wells when she dared to write about lynchings https://t.co/JHovQX2J5y

14. Man with a bow and arrow shooting at a crowd in SLC

White man in Salt Lake City, Utah yells “All Lives Matter” and then shoots bow and arrow into crowd of peaceful protesters. pic.twitter.com/b4j2Sad4ju

17. People listening to organizers in LA

Shutdown Los Angeles from The Grove to the Beverly Center peacefully 👏🏽🙌🏽 pic.twitter.com/p7kACqpZaw

Never thought I’d live to see LAPD shooting at innocent people with their hands up on the sidewalk but they did on Fairfax. And if someone raises a gun to my husband, I’m stepping in front of it. The Grove was crazy today. #laprotest pic.twitter.com/SYZXwlMbuP

19. Thousands of protestors peacefully laying down and chanting “I can’t breathe” at Colorado’s Capitol

Incredible scene at Colorado’s Capitol right now. Thousands of protesters are lying face down with their hands behind their backs chanting “I can’t breathe.” They’re doing this for 9 mins. #copolitics #denverprotest #GeorgeFloyd pic.twitter.com/PaABvp8ZoM

21. Cops get tear gas thrown back at them in front of the White House

BREAKING: Cops just started tear gassing the #JusticeForGeorgeFloyd protestor in front of the White House⁠—and immediately got a taste of their own medicine as a cannister was hurled right back at them pic.twitter.com/4O5FugTzPo

Chicago isn’t messing around raising the bridges and shutting down the L. #ChicagoProtests pic.twitter.com/sP6PI6fTzP

Here is the video. On LIVE TV the APD just broke car windows, slashed tires, tazed both passengers and arrested both passengers for NOTHING. RIPPED THEM OUT OF THER CAR. #AtlantaRiots #ATLFORUS #BlackLivesMatter pic.twitter.com/9XFDEdq7qr

My hands are shaking and I am sick to my stomach. I thought someone was going to die. #NYPD barreling down Flatbush THROUGH protestors. What the hell???!! 1/2 #JusticeForGeorgeFloyd #BLACK_LIVES_MATTER #brooklynprotest #nyc #BlackLivesMatter #GeorgeFloydMurder pic.twitter.com/tmJ8tyKTGy

ion know how this nigga got a horse but i love to see it #ChicagoProtests #BlacklivesMater pic.twitter.com/guPhasQxcb

28. Protests for George Floyd made it to Germany

They are actually protesting in BERLIN GERMANY… Our Police behavior has become a Global embarrassment.. wow. https://t.co/wYCmtnkJgF

Put this on the news. pic.twitter.com/YfXB2x6bcz