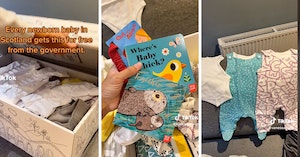 Being opposed to abortion doesn’t actually make you pro-life, as many pro-choice advocates have pointed out tirelessly over the decades. Specifically in the United States, the people who push for abortion options to be taken away are often the ones also opposed to welfare programs, increased minimum wage, and other things that would actually help create an environment for families to thrive.

But an example of something that actually is pro-life is making the rounds on social media, reminding people both not to fall for arbitrary terms co-opted by a conservative political movement, and that there are better ways to encourage birth other than prohibiting abortion.

TikToker Vanessa Kanbi (@vanessakanbi) shared a video showing a box of useful supplies given to the parents of every newborn baby in Scotland.

And this isn’t just a token — the box is absolutely packed full of quality items to relieve financial strain on parents, including clothes, a thermometer, a blanket, bibs, a teething ring, books, coupons, and more. It also includes a mattress and ultimately doubles as a bed for the baby for anyone who might need that extra help.

The Scottish government offering these simple, but extremely necessary and meaningful items without making parents jump through hoops is a jarring example of how different American society in particular is from countries that actually prioritize people.

Naysayers pointed out that these items are actually paid for by taxes, but considering the United States allows so many loopholes for corporations and the ultra-wealthy, and the rest of us already pay taxes that go towards things that don’t actually do anything to improve the quality of life for people who live here, they were shut down pretty quickly.

This box also served a perfect example of what a “pro-life” society would actually look like, as opposed to one that supports forced birth but doesn’t provide adequate paid maternity leave, free healthcare, or other forms of support.

But in America, at least we have FREEDOM. Not the freedom to choose whether or not to have a baby, depending on where you live, but, you know, some other kind of freedom, probably. Right?