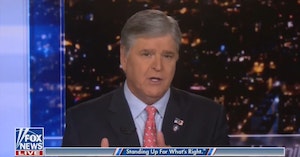 “What Is Doggy Coin?”—Confused Sean Hannity Embarrasses Himself In Crypto Chat With Cruz

In an attempt to tackle the subject of the growing popularity of cryptocurrency, particularly Bitcoin and well-known knockoffs like “Dogecoin,” Sean Hannity went on his Fox News show and demonstrated how totally with it he is by calling it “doggy coin.”

“Okay, you’ve been hearing all about it,” says Sean Hannity with all the enthusiasm of a man who is being forced to talk about the subject by his producers. “Bitcoin, cryptocurrency, what is it? Why is it so big? What is Bitcoin? What is blockchain? What is doggy coin?”

“Doggy coin” is widely believed to be a reference to “Dogecoin,” which originated as a joke cryptocurrency based on that old “doge” meme with the Shiba Inu. After it became one of the most popular among an entire list of absurd joke cryptocurrencies including entries such as Potcoin, Trumpcoin, and Titcoin, Dogecoin became a real currency and recently took off after being referenced by chronic stock market manipulator and world’s most annoying billionaire Elon Musk.

Hannity claimed that he’s been “studying this and debating this with friends for probably hundreds of hours” before admitting that he still doesn’t “understand a lot about it.” That did not, however, stop him from investing money into cryptocurrencies, but for legal reasons he has to say he is “not in any way offering financial advice.”

Admitting that he still doesn’t understand new technology and culture even after alleged hundreds of hours of talking about it may be one of the most honest moments Hannity has ever displayed on Fox News.

In spite of his ignorance, he brought on fellow confused old man Senator Ted Cruz to talk about it and share in each other’s bafflement.

Cruz, of course, used it as an opportunity to attack Joe Biden, preemptively blaming him for an alleged future “inflation crisis” and bringing up unrelated issues such as the price of lumber, gas, housing, and commodities, most or all of which were already increasing in price during the Trump years. Actual economic experts have pointed to supply and demand issues due to the pandemic as well as the standard volatility of the oil and gas market.

But expert opinions can’t stop Cruz from somehow blaming it all on Biden’s spending bills.

Again, if you look to real experts for an explanation, many point to something of a cult quality around cryptocurrencies that draw people in, praise them for investing more, and shaming them for selling, with people creating entire identities around Bitcoin. Celebrities like Musk getting on the train has fueled this fire.

“Suddenly, there’s like a new way to see, finance and to have an identity of yourself as an actor in like the financial space,” said University of Virginia assistant professor of media studies Lana Swartz to CNBC.

Cruz at least also admitted that he doesn’t “full understand it” immediately after giving his uneducated opinion.