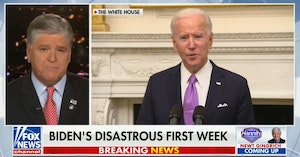 Sean Hannity of Fox News has wasted no time at all in transitioning his show from defending and praising Donald Trump to attacking everything Joe Biden does, says, or kind of looks at. In fact, he’s rushed his blanket criticism of Biden so much that after less than 48 hours of the White House being occupied by Democrats, his “breaking news” headline read “Biden’s Disastrous First Week.”

Everybody who 100 percent saw this coming is now dunking on Hannity for not knowing the difference between two days and seven days.

“The Biden administration is off to a very rocky start,” said Hannity.

To support that claim, he referenced Biden getting annoyed at a reporter asking if 100 million vaccinations in 100 days is enough, claiming that Biden was “struggling to answer simple questions.”

“When I announced it you all said it’s not possible,” Biden said to the reporter. “Come on, give me a break, man. It’s a good start, 100 million.”

What Hannity really seems to be upset about is the content of that stack of executive orders reversing many of Trump’s worst policies. He was particularly appalled that Biden canceled the Keystone XL oil pipeline that climate activists have been trying to stop since the Obama administration, claiming that it will end “hundreds of thousands of American jobs.”

Fact check: The grand total of permanent jobs this will end is 35. An additional 1,000 will be laid off earlier than expected, but that does seem like a small price to pay to avert global climate catastrophe.

Hannity also made the usual move of attacking tax cuts, claiming they will “put a huge dent in the economy and in your wallet.” How Biden’s tax cuts will somehow hurt the economy when Trump’s tax cuts “saved” the economy in Fox News world is a mystery.

He’s also still on the Hunter Biden laptop thing, bringing out a star witness who made the conscious decision to wear this hat on national television:

If you thought Fox News was getting better just because they at some point could no longer defend Trump, think again.