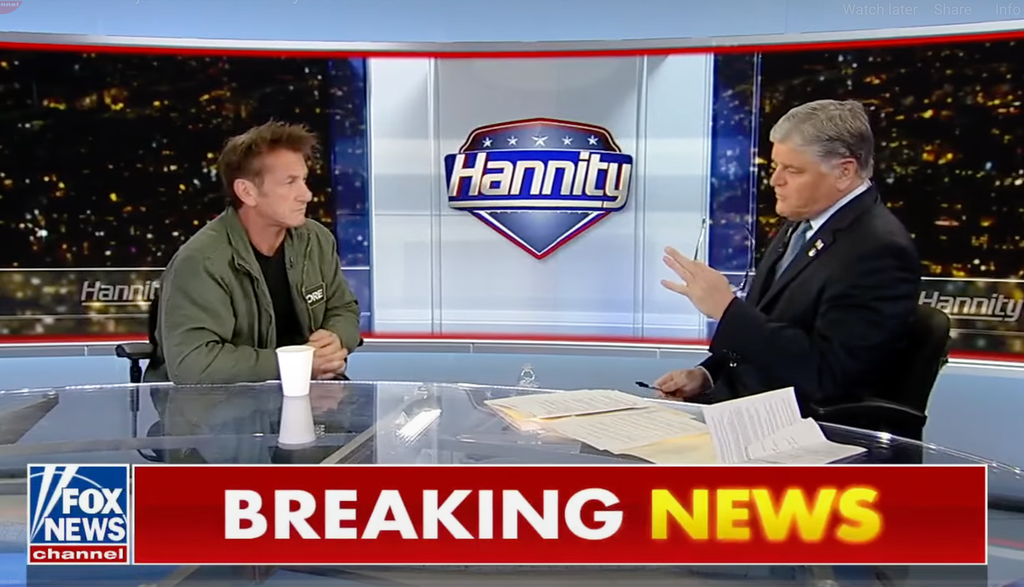 “I Don’t Trust You,” Sean Penn Tells Sean Hannity Right To His Face 

Over the years, Academy Award-winning actor Sean Penn has been at the center of many anti-war and relief operations. As part of a collaboration with VICE News, Penn began chronicling the tensions between Russia and Ukraine back in November 2021. The actor was in Ukraine filming a documentary about Russia when the invasion began, and he fled on foot to Poland.

In a recent interview, FOX News host Sean Hannity and Sean Penn came together to discuss Russia’s invasion of Ukraine.

The interview, conducted on Hannity on Tuesday, started off on an awkward note.

Hannity said to Penn, “If you were on the set… 99/100 times, we normally would be in full disagreement.”

Penn shook his head in agreement and replied, “There’s no question about that.”

Hannity referred to a phone call he had made to invite Penn onto his show, and he asked Penn to recount what he had said to him during that phone conversation.

Blank-faced, Penn retorted, “I said that I don’t trust you.”

When Hannity pressed the actor to elaborate on why exactly he doesn’t trust him, Penn added, “There’s a lot of reasons I don’t trust you.”

Back in 2007, Hannity had labeled Penn as an “enemy of the state” for his anti-Bush administration comments.

Also in the clip from 2007, Hannity claimed that Penn called him a “Whore.”

Penn then proceeded to share his emotional experience of escaping Ukraine and then fired back at the FOX host.

“I don’t have time to indulge my lack of trust, and it becomes a petty thing, as people and babies are being vaporized and people are fighting for dreams and aspirations,” he said.

For the remaining 20 minutes of the interview, the conversation shifted more amicably.

(However, I don’t think the two will be lunch buddies any time soon._

Penn explained that he was initially interested in President Zelenskyy’s rise from an average citizen to obtaining the highest seat in public office. He hopes he captured the unity and the resilience of the Ukrainian people in the filming of the documentary as well.