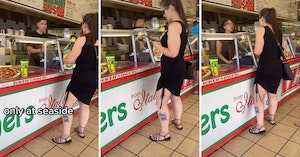 A New Jersey woman was filmed cussing out a bunch of underage teens trying to pedal pizza on a hot summer day because they rounded up the price of her order from $5.67 to an even $6, causing her to flip out, demand her money back, and insist on speaking to the manager. Since there was no manager working there at the time, she then demanded that the workers give her the manager’s phone number, which was never going to happen unless they really, really hate their boss.

In this case, the kids at least hated the Karen more, clearly irritated that they have to put up with a rude and entitled woman over a whole 37 cents because of a pricing policy that we’re sure they didn’t set themselves. To the delight of many viewers, they were not entirely shy in expressing their annoyance with her, standing up for themselves and telling her to look up contact information online if she has such a problem.

The incident was caught on video by TikTok user “Angie” at the boardwalk in Seaside Heights, New Jersey, and has gained over 2.2 million views on the video social media platform alone in the space of four days.

As the workers process the woman’s refund over the 37 cents, she snipes at one of them and eventually asks him his age, inadvertently exposing how petty she’s being over some pizza made by literal children.

“Don’t worry about it,” the Karen replies.

“Exactly, you’re arguing with a literal a– kid,” he shoots back.

After an exchange of “watch your mouths,” the woman demands to speak with the manager, but it’s clear that one is not coming. Another employee approaches the til and the Karen again demands her money back and “a number,” which is sternly refused.

“You can look it up online, you can speak to people you respect,” says the young woman processing the refund.

The cashier soon slaps the woman’s $6 on the counter and walks away. The Karen can be seen making a phone call soon after, maybe to the manager or to the pizza price police. We’ll never know, because the video ends there.

Reports of customers becoming increasingly rude and aggressive like this, even to children, have spread across the U.S. as people attempt to re-enter society because they think the pandemic is over. Some employees, particularly the underpaid, no-benefits, overworked and exploited folks we called “essential workers” for a couple months, are tired of being treated like garbage and the rest of us are enjoying watching them talk back.

Many of the comments on this video, for example, are extremely supportive of the workers and have no sympathy for a woman who made a scene over 37 cents.

“Everyone is giving her the attitude she’s giving, love to see it,” said one user.

“I honestly loved that they stood up for themselves and the young lady didn’t put the money in her hand,” said another. “Only polite behavior deserves respect!”

The top comment is from the 17-year-old worker who became the star of the video, claiming that to be him, and many people took the time to directly praise him for not putting up with that Karen entitlement.

“He handle it with grace but I would’ve threw that damn pizza in her face ugh,” wrote one commenter.