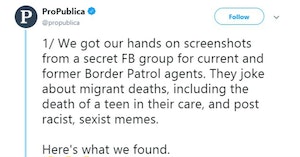 ProPublica journalists have exposed a secret Facebook group with 9,500 members created by and for former and current Border Patrol agents, the contents of which are shocking decent human beings across the U.S. and beyond. Screenshots show said agents joking about migrants who have died in custody or while trying to cross into the U.S. and “memes” depicting sexual violence against Latina women, including Representative Alexandria Ocasio-Cortez.

There are 20,000 TOTAL Customs & Border Patrol agents in the US.

9,500 – almost HALF that number – are in a racist & sexually violent secret CBP Facebook group.

They’re threatening violence on members of Congress. How do you think they’re treating caged children+families? https://t.co/AfDB50cgHQ

These disturbing revelations come alongside equally disturbing accounts of the treatment of migrants kept in concentration camps along the Southern border and all over the country. Interviewed children describe filthy conditions and a lack of running water, children stricken with flu and left untreated, pregnant mothers being left to sleep on the cold floor without so much as a blanket, and toddlers being cared for by children only a few years older than them.

Comments in the secret Facebook group show indifference at best to migrants such as the 16-year-old boy who recently died in ICE custody and sexist vitriol aimed at Latina politicians and activists visiting the camps, calling them “hoes” and “scum buckets.” Others have suggested that the gut-wrenching photo of Óscar Alberto Martínez Ramírez and his daughter Angie clinging together after drowning while attempting to cross the Rio Grande were faked.

Now I’m on my way to Clint, where the Trump admin was denying children toothpaste and soap.

This has been horrifying so far. It is hard to understate the enormity of the problem. We’re talking systemic cruelty w/ a dehumanizing culture that treats them like animals.

Joaquin Castro, head of the Congressional Hispanic Caucus and brother to presidential candidate Julián Castro, says that the Facebook group “confirms some of the worst criticisms of Customs and Border Protection.”

“These are clearly agents who are desensitized to the point of being dangerous to migrants and their co-workers,” he said.

Southern Border Communities Coalition Director Vicki Gaubeca pointed to the misogynistic and sexually violent comments and images as the reason why Border Patrol has “the lowest percentage of female agents or officers of any federal law enforcement agency.”

According to ProPublica, the United States Border Patrol has responded to these revelations by promising an “investigation.”

An update: Customs and Border Patrol has announced it is launching an investigation.

"Any employees found to have violated our standards of conduct will be held accountable." — US Border Patrol Chief https://t.co/w2JTZOR5TT

They’re going to have to do a lot better than that to silence the outcry by decent Americans going on right now.

if you ever wondered what SS officer chat would be like, well https://t.co/OeDharZTZe

A fun thing about America is how our law enforcement and immigration enforcement services are hotbeds of white supremacism and xenophobia. https://t.co/SsJLxwQXtn

hi, i try to keep the TL positive and this thread sucks to look through but you need to see it.

abolishing ICE/defunding BP are not radical leftist policies if the other option is complacency to *evidenced* racism and violence. being angry and sad doesn’t cut it. https://t.co/by2xB2TMyH

It’s not just Republican politicians that allow these concentration camps to happen. It’s the white supremacists that work there for a living who have no problem torturing children. https://t.co/WVUpDXJGtL

Thread. Jesus Christ. Burn these fucking agencies to the ground and start over. https://t.co/7gk0KpIsJY

This is so disgusting. they way they speak about both immigrants and POC who represent us in the US Congress confirms that they don’t see these people as human. That’s just one part of what makes them so dangerous. https://t.co/8YEhgQQCN1

It’s not enough that they get to torture and murder children, they think it’s funny. IMPEACH THEM ALL @HouseDemocrats @SenBobCasey @SenToomey @RepSmucker @SpeakerPelosi @SenateDems https://t.co/l7xYsKeN2d

ProPublica discovered extraordinarily disturbing evidence of unlawful cruelty at the border. This calls for an entire overhaul of border security and justice for the persecutors. https://t.co/WnEMIW5sIv

These people are the scum of scum https://t.co/z6M1kKjCim

Everyone involved should immediately lose their job. https://t.co/x9bpDRLi8S

This is sick. Explains why these people are treated like they are. https://t.co/zN5bre9WEX

This article from ProPublica should have everyone who cares about justice and humanity breathing fire. These virulantly racist and sexist CPB agents must be removed or dealt with severely. https://t.co/8NtOnYsVp2

Modern-day gestapo. Send them to The Hague. https://t.co/6JrIV1yt2G

The cruelty is the point. https://t.co/QQzKlS0fZW

Is it any wonder why we are seeing the atrocities at these facilities? How long before the 8th stage of genocide begins? https://t.co/rGoYnOsbdk https://t.co/oYfNSoaFYh

Core values on the CBP website: Integrity is our cornerstone. We are guided by the highest ethical and moral principles. Our actions bring honor to ourselves and our agency. ????‍♂️ https://t.co/PpWmc9HfzB

Border Patrol is out of control. So-called "moderate" Democrats who supported additional funding for Trump's manufactured crisis must be held accountable, along with the FB creeps mocking migrants and threatening harm to US lawmakers. https://t.co/IoZ8WJRmus

Mass protests against the U.S. migrant concentration camps are set to take place throughout July.