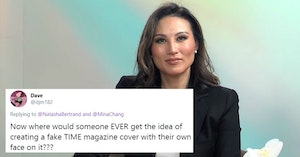 NBC News investigators found that senior Trump official Mina Chang lied her way into her position as the deputy assistant secretary in the State Department’s Bureau of Conflict and Stability Operations. According to the report, Chang faked her college credentials, claiming falsely to be a Harvard graduate, and even created a fake TIME Magazine cover with her face on it.

But that’s far from all.

“Chang, who assumed her post in April, also invented a role on a U.N. panel, claimed she had addressed both the Democratic and Republican national conventions, and implied she had testified before Congress,” NBC reports.

For seven months, nobody questioned this web of lies until she was in the running for an even more important government job that included $1 billion in its budget. Currently, she already has the very important job of preventing conflicts from erupting in politically unstable countries, for which she receives a six-figure salary and may have top security clearance.

The Trump administration has been criticized repeatedly for hiring or appointing people with little to no qualifications in positions of serious power, but Change seems to have gotten in simply due to a lack of vetting.

“It does seem that this administration has not been doing the same depth of vetting as previous administrations,” said George Mason University professor and former federal Office of Personnel Management employee James Pfiffner.

Now where would someone EVER get the idea of creating a fake TIME magazine cover with their own face on it???

So what are Chang’s credentials? She is not actually a Harvard graduate but attended a seven-week course at the university in 2016. She’s also the CEO of a small non-profit whose scope she appears to have exaggerated, with only a handful of staff underneath her. Its tax-exempt status was revoked this year after the non-profit failed to file taxes three years in a row.

If she has a college degree at all, it might be from the University of the Nations, which is mentioned on her LinkedIn account. It’s an unaccredited Christian school with volunteer teachers.

All State Department staff, including Deputy Assistant Secretaries, have to go through background checks.

Those background checks include confirming education and employment history.

Was a security clearance investigation conducted on this official?

Congress withdrew Chang’s nomination to the new, more important job after asking for more documentation on her non-existent experience.

Maybe constant chaos and fraud in the White House isn’t a good idea?