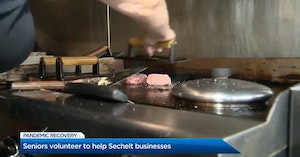 A news story out of British Columbia, Canada on local seniors who are working for free at local restaurants ostensibly to save them from going under due to a lack of employees willing to work for starvation wages has not drawn the response that Global News may have expected. Instead, thousands of commenters have condemned the “volunteering” senior citizens for helping to keep wages low during a time when the market is, for once, operating in favor of workers after people quit their terrible, low-paying jobs en masse during the pandemic.

Many who have worked or are still forced to work jobs like those at restaurants that very often pay little, offer little to no benefits, and generally destroy the human body and possibly the soul over time argue that if businesses can’t afford to pay enough to keep workers, the business has failed and should go under. People who don’t need to work “volunteering” only helps to drive down wages artificially, making the system of late-stage capitalism inevitably struggle even further as fewer and fewer can afford to exist with the rising cost of living.

In the video, the owner of PKLS Burger Bar in Sechelt Tanya Lapansky fully admits that she would be “completely screwed” without her elderly volunteer ringing people up during a lunch rush that the news report describes as “intense,” with a staff that can “barely keep up.” Rather than hiring more people or letting customers wait a little longer, she brought in a “volunteer” from a group of apparently very bored seniors calling itself “Coasters Helping Coasters” that didn’t like seeing their favorite restaurants close down.

Bizarrely, and perhaps in order to avoid violating labor laws, the seniors don’t exactly work for free. Instead, their wages are donated to charity. We can, however, assume that this wage is low enough that people are declining to take jobs at places like PKLS currently, but thanks to these volunteers, the businesses won’t have to raise this pay in order to actually attract real workers.

According to Global News, this practice is being allowed by the B.C. government as long as the restaurant owners meet certain conditions.

“The question of not paying for laying has come up, but according to the provincial government, as long as laid off employees are given the opportunity to return to work first, and the restaurant is actively in the process of hiring, there isn’t a problem using this model to staff on a temporary basis,” the report explains.

They also bring up the critical arguments that they’re “taking jobs away from young people,” which isn’t the issue so much as they’re paying less than could ever be called a living wage, but claim that there is a real worker shortage rather than a “people willing to work for pay that won’t even cover rent” shortage.

Unconvinced, many commenters have condemned Coasters Helping Coasters as being worse than “scabs,” a derogatory term referring to people who take jobs to cover vacancies during a worker strike. Many have wondered why, if these seniors have so much free time and money and want to help people, they don’t just volunteer at soup kitchens or the many other charities who are also overwhelmed right now thanks to the pandemic.

The whole thing has a lot of younger folks using the word “Boomers” again.