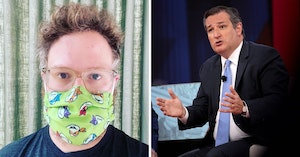 If you somehow missed it, Senator Ted Cruz has become the target of the entire nation’s ire over an increasingly stark gap between the rich and poor after he jetted off to Cancun in the middle of a massive crisis in his state.

As regular folks stand in huge lines for groceries and struggle to stay warm, Cruz was spotted in an airport boarding a plane to Mexico for a luxury vacation.

Cruz had already taken a lot of heat for being a vocal participant in the rhetoric that seemed to inspire thousands to storm the Capitol on January 6, ending in five deaths, not counting the cops who died by suicide later. This latest PR disaster for the senator has reminded everyone why he tends to be the most hated man in the room, especially when Donald Trump is no longer on Twitter.

Actor Seth Rogen had one of the more popular responses to the fiasco, gaining over 140,000 likes in a matter of hours.

“I think @SenTedCruz is desperately trying to rebrand from the ‘inspired a deadly insurrection’ motherf—er to the ‘left my constituents to freeze to death so I could go to Cancun’ motherf—er, but luckily he can be both,” Rogen tweeted. “He’s just that big a motherf—er.”

When not enjoying his new pottery hobby, Rogen has been an increasingly vocal critic of Republicans over the years, especially those like Trump and Cruz. He even got in a whole Twitter feud with Cruz after he called the senator a “fascist piece of s–t.”

After getting caught at the airport and having his Cancun vacation blown by people telling him to go do his job, Cruz booked a ticket back to Texas and released a statement in which he managed to blame his young daughters for the whole thing. He was originally planning to return on Saturday, which by a wild coincidence is the same day when temperatures will finally be getting back to normal in his state.

He also promised that he’s totally working on the problem and on helping all the people who are without food and running water right now, but that doesn’t seem to be improving his image among Seth Rogen fans.