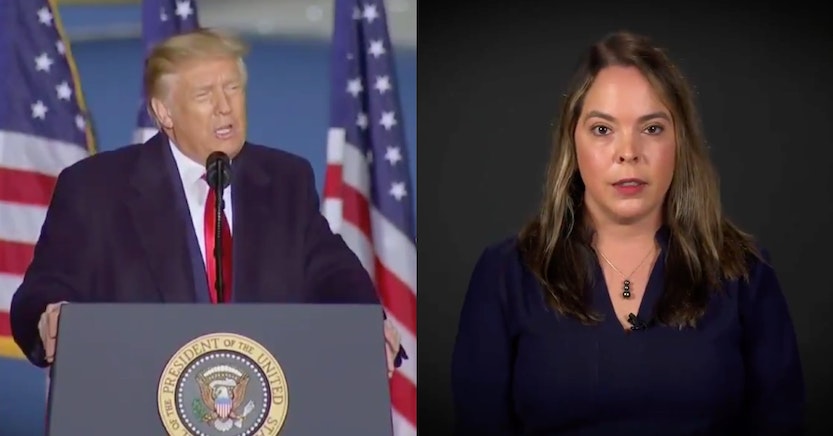 Officials who have worked in Trump’s White House keep jumping ship and backing Biden. And every tidbit of information they have to share about what caused them to make such a drastic change would be dominating news cycles if this were any other presidency, in any other year.

Most recently, a former homeland security adviser to Vice President Mike Pence who also served as his lead staffer on the White House’s coronavirus task force came forward to denounce Trump for his COVID-19 response.

In her two minute video, Olivia Troye starts out by reiterating what we’ve already learned from Bob Woodward’s interviews with Trump himself — that the Trump administration knew COVID-19 was a serious threat early on, even as they were downplaying it to the public.

“I’ve been on the COVID task force from day one,” she says. “I mean, the virus was very unpredictable at the beginning. There were a lot of unknowns. But towards the middle of February, we knew it wasn’t a matter of if COVID would become a big pandemic here in the United States, it was a matter of when.”

Others have said or speculated that at least part of Trump’s colossal failure to prepare the country for the pandemic was related to him wanting to ignore something that could have a negative impact on his chances of reelection. Troye confirms as much in her video.

“It was shocking to see the president saying that the virus was a hoax, saying that everything’s okay, when we know that it’s not. The truth is he doesn’t actually care about anyone else but himself,” she says.

And then comes what should be a particularly damning moment — again, if this were any other president, at any other time: “He made a statement once that was very striking. I never forgot it, because it pretty much defined who he was. When we were in a task force meeting, the president said ‘Maybe this COVID thing is a good thing. I don’t like shaking hands with people. I don’t have to shake hands with these disgusting people.’”

Troye also expressed that she has no doubt that if Trump would have taken the virus seriously and warned these “disgusting people” who hang on his every worth as gospel truth, thousands of lives could have been saved — something many have been saying, but a belief that she, as someone actually on the coronavirus task force, unquestionably has some authority on.

In response to the video, Trump claimed that he doesn’t even know Troye, which seems to be one of his go-to moves despite often being easily disprovable. He also suggested she’s merely a puppet with someone else pulling the strings to get her to say negative things about him.

Pence similarly dismissed Troye’s claims, writing her off as “one more disgruntled employee who’s left the White House and now has decided to play politics during an election year,” as if scores of “disgruntled employees” jeopardizing their entire careers by temporarily backing the other side is something that happens all the time.

But not everyone is buying Trump and Pence’s version. The idea that Trump hates his own supporters is not exactly novel, and wouldn’t be surprising to anyone who has paid attention to anything Trump has done or said over the entirety of not just his presidency, but his life.

It’s hard to imagine a guy with this much disregard for his constituents will be motivated to do anything to end the pandemic once the election is over and he has absolutely nothing left to lose — especially when he did absolutely nothing when he wanted to win.