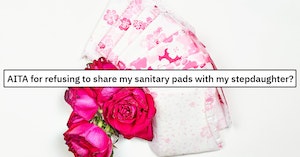 Oftentimes, headlines on the Reddit forum “Am I the A–hole” make a situation sound a lot worse than it really is, or make the people who posted them immediately seem like they’re in the wrong until you read the full post. This is not one of those situations.

In one popular recent post, a 29-year-old woman who married a man 18 years older than her asked for the opinions of Redditors on a situation involving her 16-year-old stepdaughter and a box of missing menstrual pads. The story paints a picture of someone who maybe should not have gotten involved with a man who had a child, because clearly the one described here does not trust her at all, and it’s not hard to see why.

“I’ve (29F) been married to Mark (47M) for four years, and we dated for 3 years,” wrote the OP. “Mark has a daughter, Jess (16F) from a previous relationship, whom he’s the custodian parent of. I always try to be there for Jess as a best-friend more than a motherly figure as it seems more appropriate due to the age gap between me and her.”

Trying to be a mom to someone only 13 years younger than you would be tricky, especially when, even at age 29, you don’t have the maturity necessary to achieve the basic skill of sharing. It also quickly becomes clear that her “best friend” doesn’t trust her enough to talk about things like menstruation with her.

This is pretty suspect, as the average age for getting your first period in the U.S. is 12. It’s not impossible for it to happen at age 16, but considering the rest of the post, it seems possible that “Jess” just didn’t trust her stepmom enough to tell her when it really happened.

The OP says that she bought two boxes of pads in preparation for her own period, and when it began, she went to her bathroom to discover that some of them were missing. She confronted her stepdaughter, as the only other menstruating person in the house, and was not exactly sensitive about it.

“Here’s where I may be the a–hole,” she writes. “I asked Jess had she taken the box of sanitary pads in mine and her dads bathroom, to which she denied in embarrassment. With my periods being heavy and painful and my hormones all over the place, I accused her of lying, seeing the box on her beside table, to which she answered she didn’t have the energy to argue back.”

Quick parenting tip: If your kid is so embarrassed to talk about their periods with you that they’ll lie so blatantly to your face and then just refuse to talk about it, you’re doing a bad job.

But here’s where she really cemented that “A–hole” designation:

“I left the room before angrily telling Jess that if she wants sanitary pads to get her dad to pay for them or at-least ask me to get them in future, and took the rest of the box of pads with me,” she said. “Please note that I hate sharing things with people and it’s not that I’m snobby or self-centered, i just don’t like sharing my stuff, simple as that.”

Other Redditors were not impressed with this explanation.