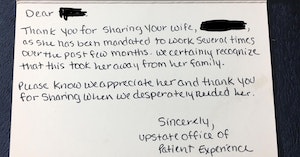 After Mandatory Overtime, Nurse’s Husband Receives ‘Thank You’ Note From Hospital For ‘Sharing’ Her

The note received by a nurse’s husband after she poured her time and energy into extra shifts at her job is serving as a reminder of how deeply ingrained sexism can be.

u/SolitudeWeeks said she had been working mandatory overtime at her hospital this past winter, something that usually isn’t allowed without fines incurred by the company, but COVID has changed up all the rules for the time being.

Rather than reward her hard work in any tangible way, the hospital, for some reason, opted to send her husband a thank you note for her time.

“Thank you for sharing your wife, [redacted], as she has been mandated to work several times over the past few months,” the handwritten note reads. “We certainly recognize that this took her away from her family. Please know we appreciate her and thank you for sharing when we desperately needed her.”

The generous interpretation of this is that someone at the hospital was trying to be thoughtful.

But the nurse went on to clarify that she didn’t receive any sort of thank you — card, overtime pay, or otherwise — which doubles down on how strange it seems that they thanked her husband. She also said these sorts of cards went out to many husbands, but the wives of her male coworkers received nothing.

So with that in mind, it’s hard not to read even unconscious sexism into such a thing.

And there’s the part where the best way to show appreciation would have simply been to compensate workers properly for forcing them to work beyond what they signed up to work.

Fortunately, the note going viral on Facebook apparently got back to the hospital and, at the very least, they appear to have stopped doing this. Now if they could only replace cards for the husband with more money for the actual employee, things might get back on the right track.