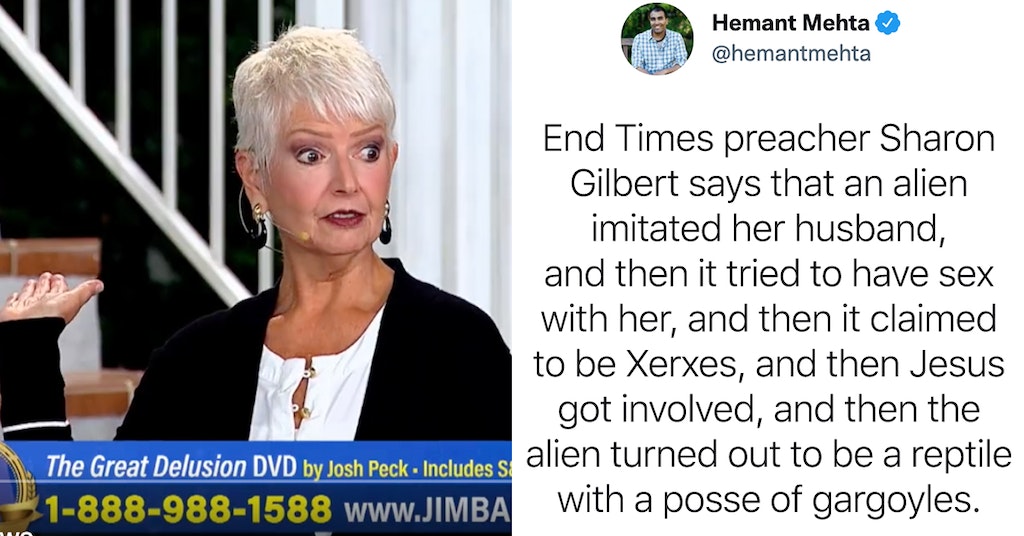 A Christian author and podcast host with a focus on the end times has publicly announced that a lizard person impersonated a historical king impersonating her husband to try to have sex with her, reminding us that there are people in this world who will never have a firm grip on reality.

Sharon K. Gilbert told her story on The Jim Bakker Show, a Christian talk show about biblical prophecy and the supposedly impending apocalypse hosted by a televangelist previously convicted on felony charges of fraud.

“After Derek and I got married, one night, this other Derek appears in our bed,” she began. “The real Derek is lying down next to me. Other Derek sits right up out of him. It startled me. I knew that was not Derek. And so I asked this critter, ‘Who are you?’ Because he clearly wanted to have sexual relations.”

This “Other Derek” that was definitely not a figment of Gilbert’s imagination allegedly insisted he was her husband before having “the nerve to claim to be” Xerxes, which presumably refers to a BC king of Persia referred to in the Bible.

“Well Other Derek seriously wanted to invite me to use my free will to do something that was going to pull me away from God,” she continued. “Finally, I said, I’ve had enough (in my mind). I reached up. I grabbed his face. And I said, ‘You are a liar, and Jesus is real.’”

Gilbert says she then pulled his face off and found a reptile underneath, complete with “halfling creatures” that were reptilian and looked like gargoyles.”

“So beneath that face of Derek was a reptilian serpentine creature, probably similar to what was visiting the Anasazi,” she concluded.

Gilbert’s account of this attempted seduction by a lizard man quickly went viral, trending on Twitter and prompting a number of tweets wondering, “What the hell?”

While Sharon herself doesn’t seem to have commented publicly on her newfound internet attention, her husband, Derek (presumably the real one), has been all up in people’s mentions defending his wife’s account and insisting telling this story is important.

“If one person who’s been through this kind of experience hears about this and realizes they’re alone, it’s worth it,” he wrote.

Perhaps we, as a society, truly are doomed.