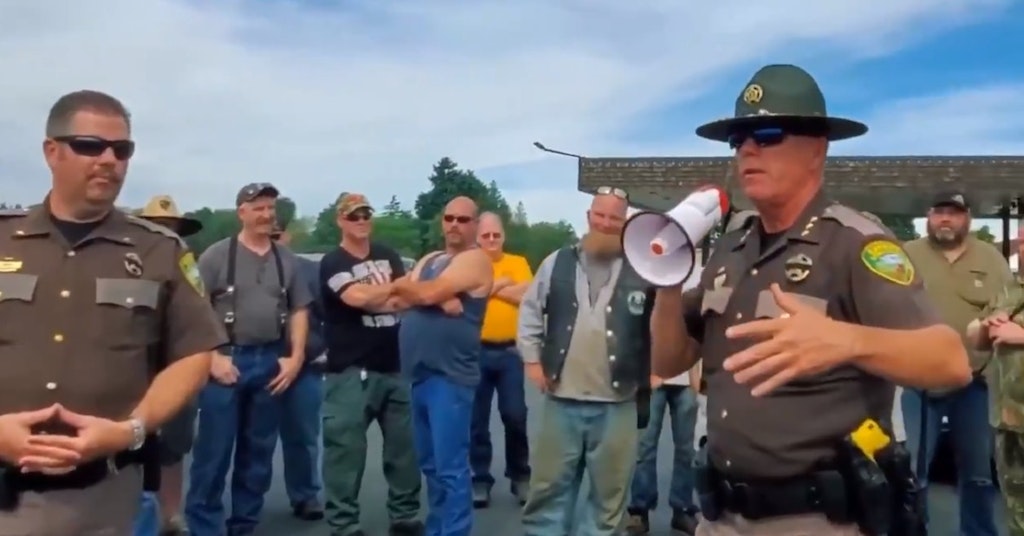 A Washington State sheriff has been put on blast for telling a crowd of people that they should defy the governor’s statewide face mask mandate, saying “don’t be a sheep.”

Lewis County Sheriff Robert Snaza, a staunch Republican, was present at a gathering of mostly maskless conservatives who had fallen for yet another rumor that “Antifa” was going to show up in their area to protest for some reason. This protest failed to materialize, but Snaza asked to address the crowd.

“In case you guys didn't hear, governor Inslee in his infinite wisdom, is deciding after over a hundred and some odd days, that we should all wear face masks inside and out. Here's what I say… don't be a sheep." Sheriff Robert Snaza, Lewis County, WA pic.twitter.com/UMT9bUEDWD

“In case you guys didn’t hear, governor Inslee in his infinite wisdom, is deciding after over a hundred and some odd days, that we should all wear face masks inside and out,” he said. “Here’s what I say: Don’t be a sheep.”

Starting on June 26, people in Washington state are required to wear masks in indoor public places such as stores and restaurants as well as outside when staying six feet apart is impossible, such as at protests. As evidence mounts that face coverings are an effective way to slow the spread of the novel coronavirus, and as new cases spike around the country, multiple local governments have issued similar mask mandates to the ire of certain individuals.

Governor Inslee’s mandate does not, however, require people to wear masks inside private residences, if that’s what Snaza meant by “inside and out.”

In later interviews, Snaza claimed that he did not mean that people should violate the law.

“Just because I said ‘don’t be sheep’ does not mean that I’m outwardly saying I want you to violate the orders,” he said the day following his megaphone speech. He also said that he does not believe that masks can prevent the spread of the virus.

“My frustration is we continue to listen to the governor’s requests without asking questions, without saying: ‘Well wait a minute, there’s the other side to this’ and in particular wearing the mask.”

Considering how many people have loudly and sometimes violently defied mask requirements, whether they’re store policies or local orders, we’re pretty sure Governor Inslee considered that side of the issue.

Though Snaza claims that the law will be enforced, he and other sheriff’s offices in red counties in the state have said that they will focus on educating the public on this issue rather than issuing citations. This is not encouraging considering how uneducated Snaza is on the topic, and it’s a tad frustrating while Black Lives Matter protesters continue to be brutalized and arrested for exercising their First Amendment rights.

In response, some Washington state residents are calling for Snaza to be fired, or failing that, ousted in the upcoming election.

Sheriff #RobertSnaza, a Republican from Lewis County, said people should break the coronavirus safety order during a speech in a church parking lot Tuesday

"Sheriff" Robert Snaza is running for re-election. I suggest you visit his Facebook page and let him and others know how you feel about a sheriff who not only doesn't uphold the law but encourages others to break it for political gain.

Fire Lewis County Sheriff Robert Snaza for actively encouraging the public to break the law. Enforcing the law is not dependent upon his personal beliefs. #firesnaza

@RobSnaza you've made yourself infamous with the following…“Don’t be a sheep,” Lewis County Sheriff Robert Snaza said to loud applause from a mostly mask-less crowd gathered in a church parking lot. pic.twitter.com/msGKooTB0j

Lewis county Washington sherif Robert Snaza @GovInslee won’t enforce mandatory masks and I’m so disgusted with this . I live in this reckless ignorant county and there has to be something that can be done when the sheriff won’t comply … #TrumpCult pic.twitter.com/l5WzQ0hb9s

Why not just quit if you don’t want to do your job?