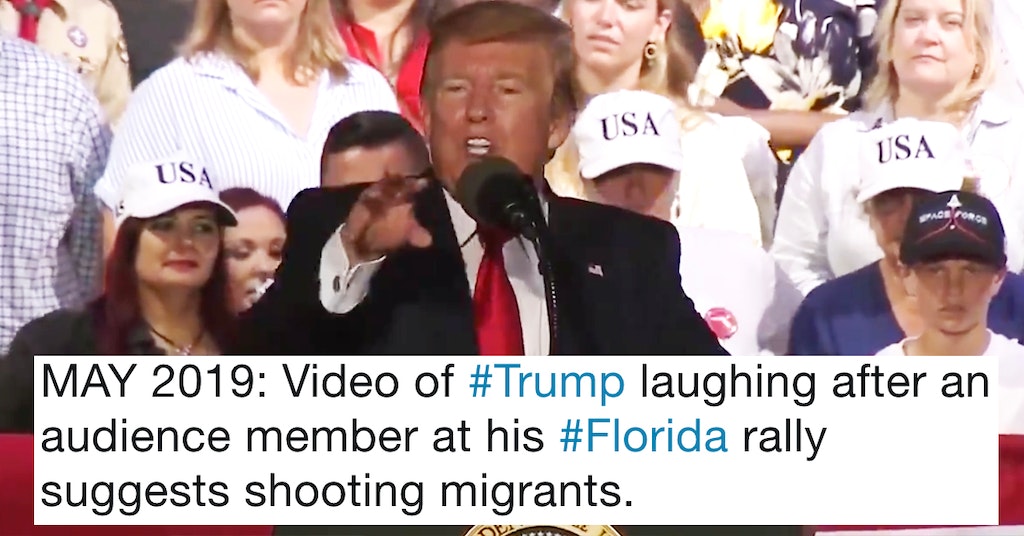 “SHOOT THEM!”—Video Resurfaces of Trump Laughing At The Idea Of Shooting Migrants

This weekend, two mass shootings took place within 24 hours of one another. The first, in El Paso, Texas, ended with 20 people dead and the 21-year-old shooter in police custody. CNN reports he has just been charged with capital murder.

A sign is posted near the site of the deadly El Paso, Texas, mass shooting that killed at least 20 people. https://t.co/ARGpI8m8I9 pic.twitter.com/oFU78R7YI1

The second shooting happened in the busy historical district of Dayton, Ohio. The shooter killed nine people in less than 30 seconds, before being shot by police. He was carrying extra magazines and wearing body armor. There’s no telling the degree of carnage that could have resulted had there not been officers close by.

This is what a 100-round drum magazine looks like from the Dayton shooting. Authorities say he had a .223-cal rifle with this attached: pic.twitter.com/sWh8MDHI0g

The El Paso shooter is allegedly connected to a document that appeared online shortly before the shooting took place. The supposed manifesto is riddled with white supremacist language, including references to the author’s hatred of immigrants, their fear that Texas would become a “Democratic stronghold” as Hispanic people moved into the state, and a disgust with “mixing races,” a common aspect of white nationalist ideology. The shooter’s social media feeds are full of tweets and posts in support of Donald Trump.

The manifesto is 4 pages long. It is vile, references white supremacist literature and is filled with seething hatred towards Hispanics and immigrants.

It’s not surprising that a Trump supporter was seething with racial hatred. Trump’s rallies have long been a place where he would whip his followers up into a frenzy, encouraging violence, including attacks against reporters and protestors. The country has seen a rise in white nationalism and racist attacks since he took office, and many were quick to draw a connection between the shootings and Trump.

In one particularly chilling video from a Trump rally, Trump tries to terrify his audience with a portrait of border patrol agents being approached by migrants trying to cross the border.

In the video, which has been circulating again since the shooting, Trump asks the crowd what to do about migrants. A supporter yells out, “Shoot them!”

Instead of condemning the voice, Trump stops, laughs, smiles, and says, “That’s only in the Panhandle you can get away with that stuff.”

People have been sharing the moment as just one example out of many for how Trump casually encourages racial violence:

He laughed. Then he made a joke. Then he mugged for the camera as the crowd applauded.

Then he just kept right on talking. https://t.co/21DBmmPew0

Three months before the #ElPasoShooting Trump and his racist supporters joked about killing migrants. https://t.co/wmhasi94Cy

Trump, talking about migrants on the southern border: “How do you stop these people?”

Trump, chuckling: “That’s only in the Panhandle you can get away with that stuff.”https://t.co/f5BGxpJA85

Trump laughs after audience member suggests shooting migrants https://t.co/4AWGdjdbB9 via @YouTube trump thought it was funny when ppl at His Rally Yelled “shoot em”.How Could anyone Laugh At The Thought of Someone being Wounded Or Killed. Oh God🙏🏻

MAY 2019: Video of #Trump laughing after an audience member at his #Florida rally suggests shooting migrants.

Trump may not have triggered the gun in the latest white supremacist mass shootings, but he definitely triggered the hate. #ElPasoTerroristAttack #ElPaso pic.twitter.com/3HcU60f80r

Trump has, at times, seemed to welcome violence toward immigrants. At a May rally in Florida, Trump bemoaned legal protections for migrants and asked rhetorically, “How do you stop these people?”

“Shoot them!” cried one audience member.

Trump: But how do you stop (migrants)?
Supporter: Shoot them
Trump: (laughs) That’s only in the Panhandle you can get away with that statement (laughs some more)pic.twitter.com/JOgWe67yRB#ElPasoMassacre

Trump has a lot to answer for, in his racist, fascist policies and in the way he has made violence acceptable to his followers. Domestic terrorism is not a punchline.