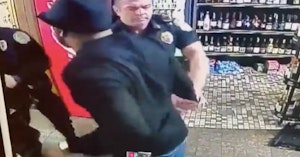 An incident in which a white police officer punched a Black store owner in the face after he called them over a shoplifting incident is being revisited in the wake of protests against police brutality happening across the nation.

Back in March, Kevin Penn called police to his liquor store in Decatur, Alabama, to report that he had apprehended someone who was stealing from him and was holding them at gunpoint.

When three police officers arrived on the scene, Penn had a gun lying on the counter next to him and was holding a magazine in one hand, according to Decatur’s Chief of Police, Nate Allen. Officers demanded Penn put down his gun, but he refused, even though he wasn’t actually holding it. One officer swooped in and punched Penn in the face so they could arrest him.

The police chief was forced to address the incident after security footage appeared online.

The country is finally paying attention to incidents of police brutality, and after the video began circulating, the people of Decatur demanded answers.

Chief Allen admitted his officers believed Penn to be the suspect, supposedly because he had a gun.

However, Penn says he was showing the gun to police so they would know that he was armed, then removed the clip and ejected the bullet from the chamber, according to AL.com.

He was ultimately charged with obstruction and suffered a broken jaw and the loss of several teeth.

The question of whether or not the officer who punched Penn in the face used excessive force certainly comes into play, but Allen seems to believe all’s well that ends well.

“I would much rather have a punch than an officer-involved shooting,” he said.

Body camera footage has not been officially released, but was shown to reporters at the press briefing.

It doesn’t paint a clear picture of what happened.

—This case of “mistaken identity” certainly raised some questions.

Chief Allen says the officer who punched Penn has been on desk duty while the incident has been under investigation for the past three months, but hasn’t released his name.

For his part, Penn has filed a complaint with internal affairs and intends to sue the police department.