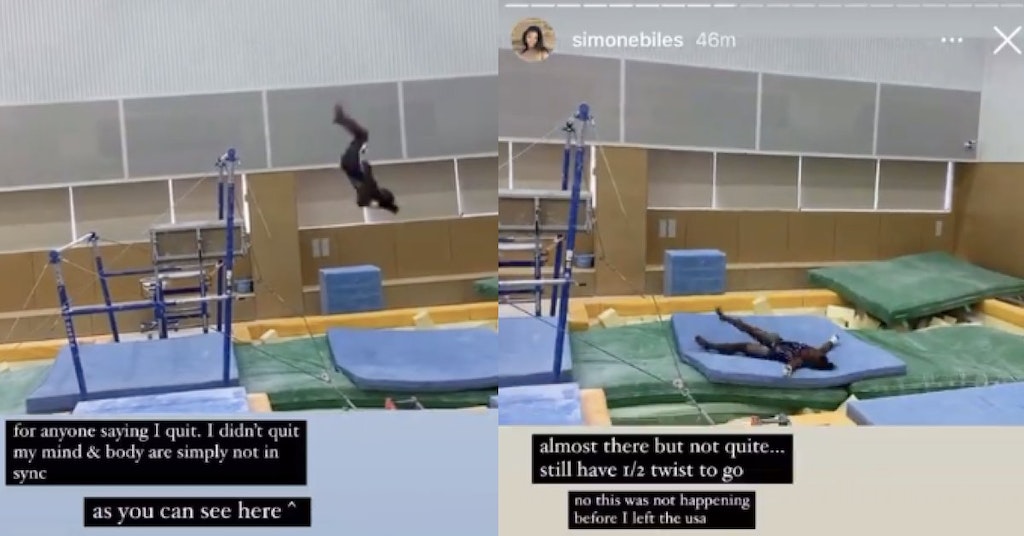 Simone Biles took a step away from the Olympic competitions to deal with her mental health, which was affecting her physical well-being. Biles has said she’s experiencing the “twisties,” a word that gymnasts use to describe how it feels to get lost in the air while performing an acrobatic maneuver, even ones they’ve done over and over again.

Unlike a lot of sports, the possibility of death or paralyzation from this kind of confusion is really high, and Biles was making the right call for her safety and for the team.

That hasn’t stopped lots of jerks from criticizing her and saying she should have “pushed through.” HuffPost reports that she has been dealing with the pushback by sharing videos of her struggle on her Instagram stories.

On Friday, she posted some clips of her practice taken that day in an environment padded for her safety. You can see that she doesn’t have it together 100%, and crashes onto the mat in a way that would have been very damaging on a hard competitive surface:

“For anyone saying I quit. I didn’t quit my mind & body are simply not in sync as you can see here. I don’t think you realize how dangerous this is on hard, competitive surface,” she explained on the clip. “Physical health is mental health.”

She answered some fan questions as well, saying that usually when she has experienced the twisties, they last about two weeks, but there’s no telling when they’ll be gone. They’re also often set off by stress—and I imagine stress comes with the Olympics.

“Sometimes I can’t even fathom twisting,” said Biles. “I seriously cannot comprehend how to twist. Strangest and weirdest thing.”

Her choice to step away from competition was also one she made for the team.

“I simply got so lost my safety was at risk as well as a team medal,” she said. Biles is an absolutely incredible gymnast who has been under an enormous amount of pressure for years, and no one knows better than her when it’s time to step away and take care of herself. She has more than earned it.