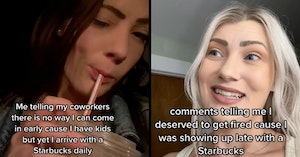 A single mother and special-education paraprofessional claims that she was fired from her job in May after a coworker shared her videos with the school’s administration.

Nicole Johnson, 29, believes that her coworker was out to get her and that they knew she was on a “thin line” with administration after she was placed on administrative leave in November for uploading “unprofessional TikToks” and “harassment of a coworker.”

The original TikToks in question were telling the story of her niece, who had suffered a traumatic brain injury while at school. According to her sister, one of Johnson’s coworkers had witnessed the incident. When people worked out who that coworker was, even though she made no mention of who they were, HR was called, and this led to her being put on three weeks of administrative leave.

When Johnson returned to work in December, she received emailed warnings from the school’s administration over being late to work, which the educator-in-training chalked up to a combination of her ADHD and being a single mother. She requested accommodations at that point.

Then on May 14, Johnson posted a video that was part of a trend on TikTok of her drinking from a Starbucks cup.

She captioned the video, “Me telling my coworkers there is no way I can come in early cause I have kids, but yet I arrive with a Starbucks daily.”

On Thursday last week, Johnson posted a TikTok about the situation, saying, “I put this TikTok out there, didn’t even, like, think anyone was going to do anything with it. I didn’t think I could get fired because I didn’t think it was unprofessional. It doesn’t swear. It’s not negative. It’s not harassing. It is literally just me being like, ‘I can’t come into work early, but I have a Starbucks.'”

The May video had been made private and reposted, and has garnered significant attention—especially from administrators who don’t use TikTok—who pulled Johnson into a meeting where printed out screenshots of her TikTok were shared around the table.

“They whipped out this full-colored picture of someone taking a picture of someone’s phone, ’cause we can’t screenshot apparently, and I could tell who was doing the pictures and whose phone, and all that. Like, I knew who it was instantly,” Johnson said.

They told her that they viewed the video as a “slap in the face.” The admins couldn’t wrap their heads around the common hashtag #FYP, aka For You Page, that has widespread use on the social media app. They claimed that it meant “F you people.”

“I’ll never get to say goodbye to the students,” Johnson said in a follow-up TikTok. “They’ll think I just left them.”