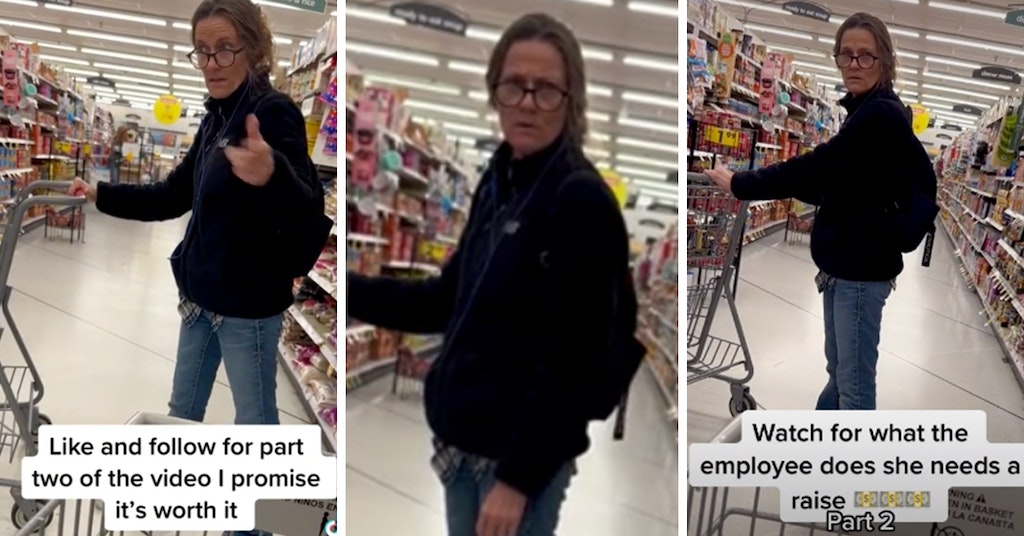 Social distancing in public places has been a positive for many people — we all keep a little more space to ourselves, feel a little bit less crowded, and live a little more comfortably in a lot of ways because of it. But staying six feet away from every person you don’t know isn’t practical in the long term in most places, and with more and more of the United States vaccinated, that six foot rule is, understandably, becoming less of a thing.

But not everyone is so ready to give it up.

TikToker @onna_crase20 was shopping at the grocery store when she encountered a maskless woman who absolutely refused to let her pass until she was done shopping in the aisle, citing the six foot rule.

“I said back up,” the woman told her. “You can go shop somewhere else, and when I’m done here looking at what I want to look at, then you can come back.”

We’re not talking about tiny city grocery store aisles, either. This one looks to have been fairly wide, with no one else in sight. But the woman did not budge. In fact, as @onna_crase220 simply stood there, and another shopper came up beside her, also hoping to pass, the woman got more and more aggressive, just standing there yelling “security!” over and over.

“If you move, we can go around you,” the new shopper tried to explain after being caught up to speed.

“No, I’m not moving,” the stubborn woman insisted. “It’s the law. If you don’t want to obey it, then get the f—k out of the United States. It’s the law. You got a problem with the law? Do you? I don’t want to die today because of you, honey.”

@oona_crase20 then asked her where her mask was, but was told it’s “irrelevant,” which is also what she said when the TikToker told her she was fully vaccinated, making it wildly unclear what this woman actually believes in for COVID protection. Just distancing, perhaps.

A confused employee was ultimately made to go bring a manager back to handle the situation, and the manager promptly took over, telling the woman she can’t stand there cursing at guests.

“I don’t have freedom of speech?” the woman asked.

Redditors were quick to come up with creative ways they would have handled the problem after viewing the spectacle.

“One of them needs to go down the other aisle, come back and trap her in so she’ll have to stay there for all eternity and scavenge off that section of food forever,” wrote u/InstructionSea667.

“I am that level of petty,” u/i_nobes_what_i_nobes agreed. “I will legitimately park my cart on one side of her and never ever leave. I will make that Walmart my new home and that aisle will be my kingdom.”

The original video was deleted from @oona_crase20’s page, but her part two was reuploaded to a different channel so everyone could see how it all ended. Spoiler alert: they do get by, but there’s a little bit more of a rough ride to get there.